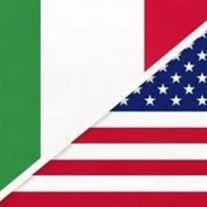 BRUNO, Alessandro, age 98, of Teaneck, NJ passed away on Saturday, January 22, 2022. Beloved husband of (the late) Antonietta. Devoted father of Anthony Bruno and his wife Donna T., Basil Bruno and his wife Linda, and his daughter, Matilda Bruno. Loving grandfather of Antonietta, Alessandro, Cassandra, Antonia and Giulia. He is survived by many cherished nephews and nieces in the United States and Italy. Alessandro is a Veteran of the Italian Army during World War II. He began his career as a stone mason artisan from an early age, following in the footsteps of his father, Antonio. He was always very proud of his work on many churches throughout Italy. He initially came to the U.S. in 1955 to work and finally immigrated, with his wife and son (Anthony), to the United States in 1962. He continued his artisanal work here for others and then finally started his own business in 1970 called The Bruno Construction Corporation. He prided himself on his craftsmanship and was well known for his impeccable work throughout the Northern New Jersey area, especially Teaneck. He was a member of the Teaneck Knights of Columbus and was a longtime parishioner of St. Joseph's Roman Catholic Church in Bogota, NJ. Since his retirement in 1989, Alessandro spent most of his time helping his children with their various businesses, continuing other masonary projects and enjoying wood work crafting. Of course, he loved making bottled home-made tomato sauce and spending time with his adored grandchildren. Friends and family are invited to visit on Tuesday from 4-8PM at Volk Leber Funeral Home, 789 Teaneck Road, Teaneck, NJ. Services from the funeral home on Wednesday at 9AM and then to St. Joseph RCC in Bogota for a 10AM Mass of Christian Burial. Entombment to follow at Washington Memorial Park, Paramus, NJ.

The family of Alessandro Bruno created this Life Tributes page to make it easy to share your memories.

BRUNO, Alessandro, age 98, of Teaneck, NJ passed away on Saturday,...

Send flowers to the Bruno family.