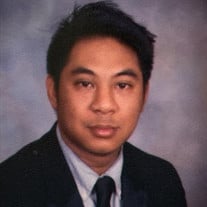 Alexander Michael Cortez Babia, shortened as Mikey for family and Alex for friends, passed away on August 5th, 2019 at the age of 28. Alex was born in NewYork-Presbyterian Hospital/Weill Cornell Medical Center on September 21st, 1990 by Belen Babia and Michael Babia. Alex is survived by his brother Christopher Babia and sister Christina Babia. For majority of his life, Alex was raised in Teaneck, NJ where he went to elementary and middle school at St. Joseph Roman Catholic School in Bogota, NJ and he went to high school at the Bergen County Technical School in Teterboro, NJ. He later received his Bachelor’s Degree cumlaude in neurobiology from NJIT. During his college years, he worked as a research assistant in Rutgers University-Newark and NJIT. Alex was also a staff writer and science columnist at the Vector: NJIT’s student newspaper. Towards the end of his life, Alex worked as a server at JD’s Steak Pit in Fort Lee, NJ and as a server and bartender at California Pizza Kitchen in Paramus, NJ. For anyone who knew him, Alex loved music. Known for playing his guitar and the piano, Alex posted many videos of his own compositions and also found enjoyment in performing at coffeehouses in Ridgewood, NJ. Additionally, Alex loved the New York Yankees so much that he wore his jersey and hat everywhere and most especially during the games that he watched at home. Alex was also an avid intellectual who loved to read, debate (he always wanted to win), and tutor people. It’s safe to say, there was never a dull moment when you’re with Alex. Family and friends are all invited for his visitation, funeral service, and reception all at St. Anastasia’s Catholic Church (1095 Teaneck Rd, Teaneck, NJ 07666). The visitation will occur from 10 am to 12 pm. The funeral service mass will occur from 12 pm to 1 pm. Finally, the reception will take place in St. Anastasia’s Catholic Church’s Redmond Center from 1 pm to 4 pm.

Alexander Michael Cortez Babia, shortened as Mikey for family and Alex for friends, passed away on August 5th, 2019 at the age of 28. Alex was born in NewYork-Presbyterian Hospital/Weill Cornell Medical Center on September 21st, 1990 by Belen... View Obituary & Service Information

The family of Alexander Michael C. Babia created this Life Tributes page to make it easy to share your memories.

Send flowers to the Babia family.