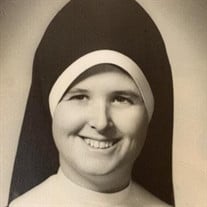 Barbara Duffy Manis April 21, 1937 - March 26, 2020 Barbara Duffy Manis entered into the peace and joy of the eternal light of our Lord on March 26, 2020, after 82 years of following God’s path here on earth. Barbara answered the call to serve God by entering the Sisters of Charity of St. Elizabeth Convent to become a nun right out of high school. After graduating with a degree in music as Sister Barbara Joseph, she went on to earn her Master's Degree in music from Notre Dame. She furthered her education by studying social studies at William Paterson University, earning another 30 credits.. Sister Barbara Joseph began her long career as an educator as music teacher starting at a parish in Jersey City, and other schools before transferring to Paramus Catholic. When the Lord presented her with a fork in the road on life's journey, after 15 years as a nun, Sister Barbara Joseph made the difficult choice of leaving the religious life. Barbara continued her career as an educator, teaching music and social studies in Fair Lawn before retiring in 2000. Over the span of her 40 plus year teaching career, Barbara influenced and inspired thousands of students with her passion for music. She married the love of her life, Lt. Colonel Joseph Manis (USMC), on St. Valentine’s Day, and was married for 37 years. They resided in Hillsdale for 35 years, where Barbara was a pillar of her faith community at the parish of St John the Baptist Roman Catholic Church for over 30 years. She held leadership positions in the life of St. John's, including four 2-year terms as Chair of the Pastoral Council, was a member of both St. John's Adult choir and the Liturgy and Intercessions Committees. She was Chair of the Readers Ministry and a reader herself. Barbara was active in two programs of the Archdiocese of Newark at St. John's; namely, the Rite of Christian Initiation of Adults and the New Energies Transition Project. She completed an archdiocesan course called Christian Foundations for Ministry. As Chair of the Pastoral Council she organized the first Ministry Fair in conjunction with the Stewardship Council outreach. The Fair continued in the same format for a number of years. Barbara was also an active contributor in the Parish's 75th Anniversary celebrations. Barbara would do an extraordinary job decorating their home at Christmas time and host extravagant dinner parties every New Years Day. One Christmas even a squirrel found the tree so irresistible that he decided to take up residence right inside it! During the hot summer months, Barbara and Joe would host backyard barbecues poolside for family and friends. You could also always depend on an invitation to come over for a cool, refreshing dip in their pool on those scorching summer days. Barbara and Joe shared the ordinary dinner preparation duties in the kitchen: Joe cooked six nights a week, and Barbara one. Her favorite cooking implement was her Visa Card, so you could always depend on a midweek invitation to go out and dine with them. Barbara's cats were always a fixture in their home. The most recent feline Sampson (aka Sammy) even resided with Barbara and Joe as they spent their last months living at The Atrium Assisted Living facility in Park Ridge. Barbara is planning to have Sammy’s ashes interred with her. Barbara’s brothers, the Reverend Stephen F. Duffy, and John M Duffy, Capt (USAF), are predeceased. She is survived by her brother Peter, whose wife Ellen predeceased him, their three children, Michael, Thomas and Suzanne Duffy, and by cousins Kristine and Susan, children of her predeceased Aunt Inge, whom Barbara was very fond of. Her parents, Stephen M Duffy and Anita K Duffy predeceased her. Barbara had unbridled enthusiasm for life. She was a passionate person with an excitable personality to match. She was dependable. She was fun. She touched the lives of countless of her students. She was committed to her friends and her faith. She loved her husband and her God. Barbara was blessed to have loyal, lifelong friends whom she cherished and loved dearly. Many of you may not be able to personally honor Barbara with your physical presence next week as she is laid to rest, since there are extremely strict state-mandated guidelines in place, limiting admission to funeral homes to single digits. Barbara’s wake will be delivered via a live video-stream over the Internet at: 10:00 AM to 11:00 AM Tuesday, March 31, 2020, at the Volk Leber Funeral Home’s website: https://www.volkleberfuneralhome.com/ At the direction of the Archdiocese of Newark, clergy are unable to enter the Funeral Home during the Corona Virus pandemic. Internment and the Christian Rite of Committal will follow immediately after Barbara’s wake at Maryrest Cemetery in Mahwah, however everyone, except for the funeral director, one clergy member and a single loved one, is not permitted at the cemetery. The plan is also to “possibly” have a live video-stream of the committal via smartphone. As soon as time permits, the Mass of Christian Burial will be scheduled at: St John the Baptist Roman Catholic Church 69 Valley St, Hillsdale NJ 07642 201-664-3131 If you are so inclined, Barbara’s wishes were for charitable donations to be made to: Sisters of Charity Development Fund PO BOX 476 Convent Station NJ 07961-0476 Thank you!

The family of Barbara Duffy Manis created this Life Tributes page to make it easy to share your memories.

Send flowers to the Manis family.