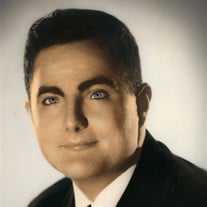 Palmisano, Cosmo L., 74, of Teaneck, NJ, formerly of North Bergen and Guttenberg, passed away peacefully on Tuesday, June 11, 2019. Beloved husband of the late Tina Palmisano (nee Orson). Devoted son of the late Leonard and Jennie Palmisano (nee Cauterucci). Loving brother of Esther M. Brinkers of Guttenberg and Anna J. King of Ramsey and her husband George. Dear uncle of Jennifer A. Bryson and her husband Erik; John Brinkers and his wife Michelle; Leonard Brinkers and his wife Valeria; David C. King and his wife Gina; Jennifer Lowe; Theresa Ramos; and Christine Kalata. He will also be missed by many grand-nieces, grand-nephews, first and second cousins, friends, and colleagues. His many accomplishments both professionally and academically include: graduating third at Memorial High School in West New York; Phi Beta Kappa with a dual degree in US History and Italian from Rutgers University; and a Master’s degree from NYU in Italian Literature. Cosmo taught at North Bergen High School for 35 years. In his retirement, he was an adjunct professor at Bergen County Community College and William Paterson University. Additionally, post retirement, he gladly accepted a position as Senior Services Advocate in Bergen County. Cosmo never hesitated to volunteer to those who needed his guidance and expertise and thus took leadership positions in the following organizations: North Bergen Education Association President for 3 years; Chairman of Government Relations Committee; Hudson County Education Assn.; PAC Executive Committee; V.P., for 15 years, of the Hudson County Retired Educators Assn.; Government Relations Committee, Hudson County, to NJREA; HCREA Executive Committee; unofficial Chaplain of HCREA; Member of the Delegate Committee for New Jersey Education Assn.; member of the NJEA Government Relations Committee; state delegate to the NEA Representative Assembly (NEA Convention); National Education Assn. NJEA State Delegate to the NEA Convention; elected to the NEA Resolutions Committee; member of the Executive Board of the Alumni Assn. for Rutgers University (Newark); member of the Foreign Languages Assn.; and served as a member of the Teaneck Democratic Club. Cosmo was awarded the Sen. Matthew Feldman Award for Community Service, specifically highlighting his work as a volunteer at Holy Name Hospital, as a Eucharistic Minister, and for his Interreligious fellowship for the Homeless in Bergen County. He was also a member of the Knights of Columbus; Sons of Italy; Bread for the World; Historical Preservation Committee; Senior Citizens Advisory Board; Teaneck Seniors; and was a Eucharistic Minister at St. Anastasia’s Roman Catholic Church. He travelled to Italy many times throughout his life and mastered the Italian language, speaking it like a native Italian. His love of politics and education took him to conventions and seminars throughout the country. Cosmo was a devoted family man and will be remembered for his great sense of humor and wit, and for his legacy of teaching, volunteerism, and compassion. Family and friends are invited to visit on Sunday from 1-3pm and 5-8pm, at the Volk Leber Funeral Home, 789 Teaneck Rd., Teaneck. Funeral service from the funeral home on Monday at 9am, then to St. Anastasia’s RCC, Teaneck, for a 10am Mass of Christian Burial. Entombment immediately following at George Washington Memorial Park, Paramus. Memorial contributions in Cosmo’s name can be made to Rutgers University or Memorial Sloan Kettering Cancer Center.

The family of Cosmo L. Palmisano created this Life Tributes page to make it easy to share your memories.

Send flowers to the Palmisano family.