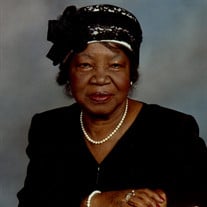 Edna Mae Singleton was born September 17, 1924 in Wilmington, NC, to Loved Jane McKoy and Samuel Singleton. Reared by her grandmother Bertha Mae McKoy, Edna grew up with her aunts, Bobbye, Inez, Lessie and her uncle, Rufus more like a sibling than a niece. She graduated from Williston Industrial High School in 1942. She later migrated to New York City to live with her Aunt Bobbye Katie Jenkins. Edna was a renaissance woman who loved going to parties and Jitterbug dance contests in the big Apple. It was during this time that she met Ulee “Lee” Gallmon. They married in 1958 and moved to the Bronx to be near her best friend from home, Ruth Richardson (Sister), and cousin, Loueva Hargraves. They purchased a home in Teaneck that quickly became a favorite family gathering place for family events. Lee and Edna never had children but were surrogates who opened their home and hearts to many in the family who needed a place of respite, love and support. They remained in a happy and loving relationship until his death in 1989. Edna spent the majority of her professional career working for the Internal Revenue Service (IRS) and devoted more than 40 years of service. This is where Edna met her lifetime friend Gertrude “Gerty” Scott. After the passing of her devoted husband, Edna she traveled frequently back to Wilmington. It was at a high school reunion that she re-connected with her old high school sweetheart Rufus Hines. After a 50-year hiatus, they rekindled their love for one another. They unselfishly cared for each other in a beautiful and devoted way. Edna Eventually moved back to Wilmington in 1998 to be closer to Rufus. They shared a wonderful life together until his passing in 2014. She was fashionista, a traveler and an anchor for her family. She touched many lives. Edna’s love for family transcended traditional roles and relationships. She was a Mother, Grandmother, Aunt and Sister to many, regardless of the bloodline. At her death, she was the matriarch of the family and cherished that role with love and devotion. Edna Gallmon had a long and healthy life and passed away peacefully on September 16, 2019, the day before her 95th birthday surrounded by loved ones. She is survived by her children: Gaile Dry Burton and Debra Frazier; grandchild: Michelle Sainte; great-grandchild: Michael Sainte; her cousins: Irma McKoy, Sue Williams; nieces: Elizabeth Richardson, Patsy Priant, Debra Gray, Ann Hall, and Jacqueline Jones; nephews: Henri Priant, Brian Walker, Greg Hall and Samuel Hall; her Gallmon brothers, sisters, nieces and nephews; and her Godson Anthony Hargraves. She will be missed by a host of loved ones whose lives were touched by her generosity.

The family of Edna M. Gallmon created this Life Tributes page to make it easy to share your memories.

Send flowers to the Gallmon family.