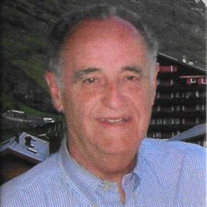 Dr. Eugene J. Westlake, 85, a resident of Oradell for 51 years, departed this life peacefully at home among members of his immediate family on December 12, 2019. Predeceased by his wife, Phyllis, Gene, a man of deep-rooted faith, longfully anticipated reuniting with her in eternal bliss. Together from their high-school days at Good Council in Newark, their marriage brought forth a loving family of eight children, 26 grandchildren and eight great-grandchildren: Eugene and Tammi Westlake, Mark and Liz Westlake, Gary and Maria Westlake, Cindy and Brian Sherlock, Elisa and Dean Karch, Suzanne Westlake and Jay King, Marilyn and Brian Nichols, Matthew and Heather Westlake. Gene graduated with a B.A. and M.A. from Seton Hall University and a PhD from Fordham University. He began his teaching career in Belleville, NJ, subsequent to which he was offered a contract in 1962 by the Northern Valley Regional High School Board of Education. Throughout his successful tenure of 40 years, he was an English teacher, Guidance counselor, Assistant Principal, Principal, and ultimately Superintendent. Whatever the position he fulfilled, he always earned the respect and admiration of his colleagues, students, and community by just being the outstanding person he was: genuine, humble, caring. Gene was active in many professional organizations. He was the Bergen County representative to the New Jersey Interscholastic Association. Their charged responsibility was to establish rules and regulations governing school athletic activities and to adjudicate proposed grievances. Gene also served on the Oradell Board of Education and was re-elected as recently as last month. He was currently serving as President of the Friends of River Dell (FORD) which provides funds for student facilities and scholarships. He served on the Parish Council at St. Joseph’s Church in Oradell and was currently serving on the Parish Council of St. Peter’s Church in River Edge. Recognizing the extent of his communal contributions, he was awarded the YMCA Bergen County Person of the Year in 1998. Unstinting of his time and talent in his younger days, he also coached Girls Softball, Boys Little League and Babe Ruth Baseball, all of which reflected his sense of civic responsibility to the community. Upon retirement, he also was an interim superintendent at River Dell Regional High School, Paramus High School, and Tenafly High School. Visiting hours will be held on Tuesday, December 17th, from 3-8pm, at St. Peter’s Catholic Church, 445 5th Ave., River Edge, NJ 07661. A funeral mass will be celebrated on Wednesday, December 18th, at 11am at St. Peter’s Catholic Church. In lieu of flowers, donations may be made to St. Peter’s Church.

Dr. Eugene J. Westlake, 85, a resident of Oradell for 51 years, departed this life peacefully at home among members of his immediate family on December 12, 2019. Predeceased by his wife, Phyllis, Gene, a man of deep-rooted faith, longfully... View Obituary & Service Information

The family of Dr. Eugene Joseph Westlake created this Life Tributes page to make it easy to share your memories.

Send flowers to the Westlake family.