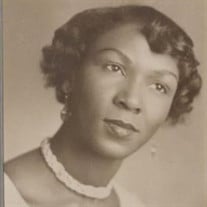 Euvetta Ilene Bernadette Tiburcio, passed away May 16, 2020 in her Teaneck, NJ home surrounded by love. She was born August 1, 1927 to Daisy Olive and Joseph A. Moore in Manhattan, New York City. She was the 4th of 7 siblings and the youngest girl. Euvetta grew up in the South Bronx neighborhood of Mott Haven and would remember earlier times of her childhood as being very turbulent. During that period the Bronx, like the rest of New York, was undergoing a vast migration of peoples from Europe as well as the West Indies and her environment was filled with fear and often physical encounters. However, despite the cultural differences and challenges, Euvetta developed extraordinary inner strength and fortitude and persevered. She also cherished much of her childhood experiences which culminated into many lifelong friendships. Euvetta attended Central Commercial High School where she learned to be a seamstress. She would work as a seamstress for the next 21 years in the Garment District. Euvetta was always looking for opportunities to grow and do better. So, although she initially obtained a Commercial High School diploma, she went back to school to get a General diploma. Upon graduation she obtained a clerical position within the New York City Human Resources Administration. She excelled there and was subsequently promoted to unit supervisor. Euvetta was very active outside of her job. She along with her parents and close relatives were key members of the Masonic Temple in Harlem. There, Euvetta undertook the duties of Treasurer. She developed excellent bookkeeping skills which led to her parents giving her responsibility for keeping the family business records. Euvetta was also very active in the Girl Scouts as a Scoutmaster. She accompanied troops on various trips including one to Canada which must have been a huge thrill for those young girls in Harlem and the South Bronx who traveled with her. She was also an expert swimmer. She often taught swimming at the 135th Street YMCA. Euvetta was a kind and gentle soul. If you ever met her, she would greet you with a warm smile and a warm heart. To know her was to love her and she loved spending time with everyone. She loved to dance and enjoyed playing her favorite Rummy Cube game. Euvetta was preceded by her parents, her brothers Alphonso, Nyambolo, Doughlas and Krimm; her sisters Abdel Barbra Forster and Thelma Jackson; her surrogate sister Ida Ramos; her nephew Pernell, and her oldest and dearest friend Orie Lee Clark. She will be deeply missed by her son Douglas, grandsons Douglas Jr. and Michael Smith, Janet Gordon and family, niece Avis Foster and family, nephew Samuel Moore and family, niece Marguerite Smith and family, nephews Manuel and Marlow Smith and families; sister-in-law Bernice Ethelridge and family Dawn, Carlos and Vanessa. In addition, Euvetta’s love extended beyond her biological family to include her “daughter” Kathy Stumpf and sons Devin and Justin; “daughter" Michele Papavasiliou and sons Jessie and Michael; her dear friend Gail Floyd (who was her rock) and family; Raul Canabal who she held as her son; Wes, Lora and Scott Geter and family; Talan Oneza and family; Lili Hughes and family; Cheryl Chin and family; Ernie Roberts; and numerous other family and friends too many to be listed here. Special acknowledgement to the Ramos family and to Tina and Belinda for their outstanding support and care.

Euvetta Ilene Bernadette Tiburcio, passed away May 16, 2020 in her Teaneck, NJ home surrounded by love. She was born August 1, 1927 to Daisy Olive and Joseph A. Moore in Manhattan, New York City. She was the 4th of 7 siblings and the youngest... View Obituary & Service Information

The family of Euvetta I. Tiburcio created this Life Tributes page to make it easy to share your memories.

Send flowers to the Tiburcio family.