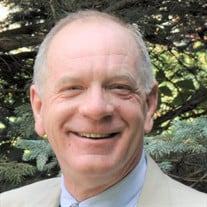 With great sorrow, we announce that Frederick William Hessmer, IV of Chevy Chase, Maryland, formerly of Cresskill, New Jersey, passed away suddenly on December 1, 2020. Bill/Billy/Frederick/Freddy/William/Willy (depending on who you are) will be forever missed by his brother Thomas Hessmer, his sister Jane Hessmer Reilly and her husband Stephen Reilly, his niece Marina Reilly, his nephews Tymeson Reilly and Everett Reilly, his loyal Chi Phi brothers and many wonderful friends. He was predeceased by his father, Frederick William Hessmer, III (d. 3/1/1989) and his mother Zoan Fox Hessmer (d. 3/29/2020). Bill was born on May 2, 1960 in New York City and grew up in Cresskill, NJ. He graduated from Franklin & Marshall College and earned his Juris Doctor from the Washington College of Law, American University. At the Washington College of Law, he was a founding member, senior editor and on the executive board of the Administrative Law Journal. He remained an active alumnus until his death. After working as an attorney at the Lee F. Holdmann, Chartered law firm, in 1998 Bill became a founding member of Thomason & Hessmer, LLC, a law firm specializing in estate planning and trust administration. He was a proud member of the Montgomery County, Maryland State, American, and United States Supreme Court Bar Associations. A Son of the American Revolution, Bill took great interest and pride in his heritage as a descendant of Thomas Danforth of Salem Witch Trials fame, and William C. Bouck, the 13th Governor of New York, as well as his relation to Billy Mitchell, father of the U.S. Air Force, to name a few. Bill had many passions in life – avid reader, especially of historical biographies, enthusiastic gardener, amateur photographer, music aficionado, accomplished cook and wine connoisseur among other interests. A very social guy, Bill will be remembered for his wide smile and infectious laugh by all who knew and loved him. In lieu of flowers, the family suggests memorial contributions in Bill's name to Church of the Atonement, 97 Highwood Avenue, Tenafly, NJ 07670. Family and friends are invited to visit on December 18th from 4-8pm at the Volk Leber Funeral Home, 268 Kinderkamack Rd., Oradell, NJ. There will be a short prayer service and eulogy at 6pm. Private cremation.

With great sorrow, we announce that Frederick William Hessmer, IV of Chevy Chase, Maryland, formerly of Cresskill, New Jersey, passed away suddenly on December 1, 2020. Bill/Billy/Frederick/Freddy/William/Willy (depending on who you are) will... View Obituary & Service Information

The family of F. William Hessmer IV created this Life Tributes page to make it easy to share your memories.

With great sorrow, we announce that Frederick William Hessmer,...

Send flowers to the Hessmer family.