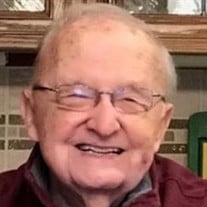 Francis Charles Nichols, Jr., M.D. entered eternal life on July 2, 2021, in his ninety-fourth year from his home in Oradell, N.J. Born in Montclair, N.J. on August 17, 1927, Francis was the son of Francis C. and Loyola E. Nichols. Francis grew up in Wood-Ridge, N.J. and was a graduate of St. Mary’s High School, Rutherford, N.J. He was active in Boy Scouts at Corpus Christi Church, Hasbrouck Heights, N.J. and earned his Eagle Scout rank. He served in the United States Navy from 1945 to 1947. Upon completion of his WW II Naval service, Francis earned his college degree from Xavier University, Cincinnati, OH and received his medical degree in 1952 from Loyola University Stritch School of Medicine, Chicago, IL. Following his internship at Cook County Hospital, Chicago, IL, he did his surgical residency at the Mayo Clinic, Rochester, MN from 1954 to 1958. While at Mayo Clinic he completed his Masters in Surgery from the University of Minnesota. During his time in Minnesota, his life forever changed when he met and ultimately married his “best friend for life” Rita Mary Conzemius on July 6, 1957. The couple moved to New Jersey in 1958 where Francis became a respected general and thoracic surgeon for over 40 years at Hackensack Hospital, now Hackensack University Medical Center. The consummate surgeon and physician, he loved his profession and was unwavering in his commitment to his patients. While at Hackensack Hospital, in addition to his general surgery responsibilities, he served as the Chief of the Division of Thoracic Surgery. He treasured teaching young surgeons and was the recipient of the surgical Teacher of the Year award on numerous occasions. He was truly proud of his many years of dedicated service on the Hospital Board of Governors and participating in Hackensack Hospital's evolution from a community hospital to a University Medical Center. Francis and Rita lived many years first in his hometown of Wood-Ridge and then Oradell, N.J. raising their eight children. He was the quintessential Catholic gentleman and a decades-long parishioner of Our Lady of the Assumption Church, Wood-Ridge, N.J. and then Church of the Assumption, Emerson, N.J. His love for Notre Dame football was steadfast and trips to South Bend always special. A longstanding member of the Hackensack Golf Club, Francis spent many enjoyable years playing golf with Rita, his children, and close friends. He treasured the time he and Rita spent at their vacation house on Long Beach Island with children and grandchildren. Predeceased by his sister, Loyola Marie Gleason, Francis is survived by his loving wife of almost 64 years, Rita, his devoted children Francis C. (Judy) Nichols, George (Dorothy) Nichols, Rita (Kevin) Danylchuk, Margaret (Mark) Degand, Harold F. Nichols, Brian (Marilyn) Nichols, Craig (Robin) Nichols, and Linda (Christopher) Marino. He also leaves his 16 grandchildren and 1 great-grandchild. Visitation will be held at the Volk Leber Funeral Home, 268 Kinderkamack Road, Oradell, N.J. on Tuesday, July 13th from 4-8 P.M. A funeral Mass celebrating his life will be Wednesday, July 14th at 10 A.M., Church of the Assumption, 29 Jefferson Ave., Emerson, N.J. 07630. Interment to follow at Maryrest Cemetery, 770 Darlington Avenue, Mahwah, N.J. In lieu of flowers, donations in his name to Hackensack University Medical Center Foundation would be appreciated. Click Here to Donate to the Hackensack University Medical Center Foundation

The family of Dr. Francis C Nichols created this Life Tributes page to make it easy to share your memories.