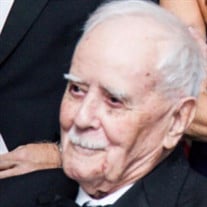 Frank James Mazanec, age 101, passed away on November 28, 2021. He was born in Union City, NJ on May 5, 1920. He is predeceased by his beloved wife of 68 years, Josephine (nee Quercia). The two met as teens while working in a button factory in Hudson County and went on to marry in 1943 and raise a family together, living for many years in West New York, NJ. Frank commuted from West New York to lower Manhattan for over thirty-five years, working as a traffic manager for steamship companies, Texas Transport and J. F. Whitney & Co. Later, Frank and Josephine resided in Fairview, Little Ferry and lastly, in Bridgeport and Milford, CT. Frank took pride in being a family man and was proud of the accomplishments of his three children as they had secured college educations, and pursued professional careers as a civil engineer, teacher, and lawyer. Frank had little formal education beyond some high school and business classes taken on the G.I. Bill, but he was not short on intelligence. He had an uncanny facility for math and, possessed a wealth of common sense and pragmatism as well as a dry sense of humor. He was a proud World War II Veteran, serving in the U.S. Army’s 308th Regiment, 78th Infantry Division in Germany, where he was wounded and received a Purple Heart as well as a combat badge. He is a life-long member of the Veterans of Foreign Wars, Post 809, Little Ferry, NJ. He was the son of Frank Mazanec and Adeline Morgues Mazanec. He is survived by his sisters Dorothy Tribastone and Joan Bruno and predeceased by his brother John Mazanec and sister Lorraine Mazanec and his many sisters and brothers-in-law. He is survived by his son, Frank J. Mazanec (Claudia) of Encinitas, CA and daughter, Carolyn Dugas (Floyd) of Milford, CT. He was predeceased by his daughter Michele Meliti (Albert)of Sparta, NJ. He leaves behind six grandchildren (Sean, Ashley, Rachael, Nicholas, Chelsea and Chandler) and four great grandchildren (Sophia, Emma, Brooks and Maya). Visiting hours will be held at Volk Leber Funeral Home, 789 Teaneck Road, Teaneck, NJ on Sunday, December 5, 2021, between 2 -6 p.m. In lieu of flowers, donations may be made to the Disabled Veterans National Foundation, dvnf.org. Private burial on Monday, December 6, 2021, at Brigadier General William C. Doyle Veterans Memorial Cemetery, Wrightstown, NJ.

Frank James Mazanec, age 101, passed away on November 28, 2021. He was born in Union City, NJ on May 5, 1920. He is predeceased by his beloved wife of 68 years, Josephine (nee Quercia). The two met as teens while working in a button factory... View Obituary & Service Information

The family of Frank James Mazanec created this Life Tributes page to make it easy to share your memories.

Send flowers to the Mazanec family.