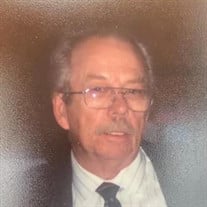 George J. Kruckmeyer, 78, of Belvidere, NJ passed away peacefully on Sunday, October 3, 2021. George devoted his time as Terminal Operations Manager for Apex Oil in Baltimore, MD. He started his career in the oil and energy industry by working on the pipeline at Rollins Terminal, Bayonne, NJ in the early 70s. He quickly moved up and became Operations Manager for Tennaco Oil and held multiple positions along the way, including: Vice President of Environmental Compliance. In 2006, George transferred to Stratus Petroleum and ended his career at Apex oil Company in the Baltimore terminal. His legacy will be his development of the rail car inventory tracking system, now used in all terminals throughout the country. Apex Oil now uses this successful system as standard operational procedure. Lovingly known as "George's Book of Knowledge", George's vast knowledge of terminal operations lead the way of him becoming a mentor and friend of so many, including the corporate offices of the Midwest. George retired August of 2020, due to the Covid-19 Pandemic. His retirement still came 8 years later than expected because of how much the company valued his mentorship and vast knowledge. George was a proud member of a motorcycle club on the 60s called the Romans. He majored in psychology at Rutgers University. He was a lover of anything mathematical and always preached "get your knowns on one side and your unknowns on another." George loved Sci-Fi movies and shows with two of his favorites being Star trek and Dr. Who. George was often sought after for his advice. Something he always said was, "do what ever you want to do in life, just know what you're getting into." His favorite saying was an evolutionary idea Freud relied on: ontogeny recapitulates phylogeny. George is survived by his dear children; Kim Kruckmeyer, George Kruckmeyer, and Daughter-in-law Marina Kruckmeyer, sister; Marlene Porkjy, loving grandchildren; Zoe Kruckmeyer, Rosina Huddleston, and AJ Huddleston. He is predeceased by his beloved wife; Carolyn Kruckmeyer and sisters; Linda Borngesser, Phyllis Poluch, and Kathy Robinson. Family and friends are invited to the visitation on Friday, October 8, 2021 form 4-8pm at Volk Leber Funeral Home, 789 Teaneck Road, Teaneck, NJ 07666. A memorial donation in his name can be made to Grace Health Care, 105 Fieldcrest Ave, Suite 402, Edison, NJ 0887-3628.

George J. Kruckmeyer, 78, of Belvidere, NJ passed away peacefully on Sunday, October 3, 2021. George devoted his time as Terminal Operations Manager for Apex Oil in Baltimore, MD. He started his career in the oil and energy industry by working... View Obituary & Service Information

The family of George J Kruckmeyer created this Life Tributes page to make it easy to share your memories.

Send flowers to the Kruckmeyer family.