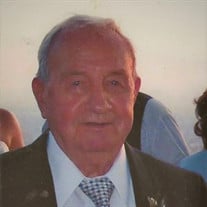 Born a sharecropper’s son in Fincastle, Virginia George was at home on a farm. He surrounded his life and homes with fruit trees, vegetables and flowers… a constant gardener who drew strength from his contact with the Earth. From his childhood in Shawsville to one of his favorite jobs as a young man in the hothouse florists near Fincastle, and finally, to his home of seven decades in Cresskill, there were always flowers, always vegetables, and always a budding family of children and grandchildren to be found in the gardens he planted. George Washington Wymer, a longtime resident of Cresskill, and Ocean Grove, New Jersey; of Del Ray Beach, Florida, and Myrtle Beach, South Carolina, is at rest. He was 93. At the time of World War II, George did what many of his generation did—he dropped out of high school and joined the Army, serving with the First Infantry in Czechoslovakia & Germany. When the war ended, the second lieutenant was stationed in Governor’s Island, New York City. He enrolled in Washington Irving High School, working on his GED, when he met the love of his life, Nancy Leone. Before the school term ended, his orders cut for a post in Fort Riley, Kansas, he proposed, and on June 5, 1949, they embarked on a 65-year journey of travel, laughter, tears, and adventures. George remained in the Army during the Korean War. Before he retired from the Army in 1953, Captain George Wymer had been awarded the Purple Heart, the Silver Star, the Grand Commander’s Cross-Order of the Polish Restitution, and the Air Medal with Oak Leaf clusters among other citations and honors. He finished his service in the Army National Guard, serving in Englewood, Teterboro and Old Bridge as the Battery Commander with Hercules and Nike Missiles. After his stint in the Army, George worked in sales, as a builder, as a building inspector for Paramus, as a construction manager for Bergen County’s Community Development program, and as a construction official for the state of NJ. In this capacity, he oversaw the building of many state projects, among them the Hughes Justice Complex in Trenton, the state penitentiary in Newark, and the NJ Veteran’s Nursing Home in Paramus. When he and his wife Nancy retired, he continued his work for the state by working in contract arbitration, until the lure of their grandchildren caused them to adopt the slogan “Keep on Truckin’” as they traveled from New Jersey to the Carolinas, California, and Florida. His last post was as caregiver for his Nancy, tending to her in the final years of her life—determined to keep her home and keep them together. In the last years of his retirement, George became an active member of the Disabled American Veterans Chapter 32 in Bergenfield. He was proud to be named Grand Marshal of the Cresskill Memorial Day Parade in 2019. George is predeceased by his devoted wife, Nancy (2015), his daughter Phyllis (1998), his brother Richard (1973), and his mother Betty (1970). He is survived by his other children, grandchildren, and great-grandchildren: Phyllis’ children Michele Curry & Christopher Curry & his wife Rebecca, & great-grandchildren Madison and Colin; son George Richard, & his children Mikalena Caroline, George Anthony, & great-granddaughter Daphne Rose; daughter Toni Wymer, her husband Michael Sollenberger & their children Matthew, Julia, & Ben; daughter Nancy P Wymer; son Vincent, his wife MaryEllen & their children Jessica, Vincent, & Nicholas; and many nieces & nephews from the Wymer, Savia, Leone, and Greco families. Visitation at Volk-Leber Funeral Home in Oradell, NJ from (2:30 pm-7:30 pm) on Thursday, November 19. Funeral mass at St. Therese of Lisieux Church in Cresskill on Friday at 12 Noon. In lieu of flowers, a donation in his honor may be made to the Disabled American Veterans, and the Parkinson’s Foundation.

Born a sharecropper&#8217;s son in Fincastle, Virginia George was at home on a farm. He surrounded his life and homes with fruit trees, vegetables and flowers&#8230; a constant gardener who drew strength from his contact with the Earth. From... View Obituary & Service Information

The family of George W. Wymer created this Life Tributes page to make it easy to share your memories.

Born a sharecropper’s son in Fincastle, Virginia George was at...

Send flowers to the Wymer family.