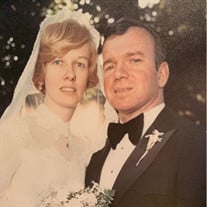 Hugh Joseph Flanagan, 81, of Oradell, NJ (formerly Bronx, NY), passed away peacefully on February 21, 2021. Eleanor Marie Flanagan (nee Dodd), 77, passed away peacefully on June 15, 2021. Their parents, and Hugh's sister, Margaret Flanagan predeceased them. They are survived by family relatives from both sides. They remained close to longtime friendships, and the many friends who entered into their lives after their marriage 45 years ago. They both attended the same St. Nicholas of Tolentine High School in the Bronx, NY. Hugh was educated by the De La Salle Christian Brothers in the Boys Dept., while Eleanor was educated by the Dominican Sisters of Blauvelt, Sisters of Saint Dominic, in the Girls Dept. Eleanor received her RN from The Bronx Community College and Graduate Degree from The New School. Hugh spent time in the US Army where he was deployed to Panama. Upon his discharge form the Army, Hugh was employed by J.P. Morgan Chase as a Banker, and also attended Pace University, NYC. They were both quiet people, they didn't draw attention to themselves but both loved being with people. They were kind, generous, and loved their parents and in later years traveled with both their Pops. They took them on trips together, out to dinner on Sundays, and vacations to the Thousand Islands and Cape Vincent. Eleanor loved to watch and photograph the sunsets over Canada, her forever love of animals came out through knowing & loving her friends' pets. Hughie loved his carpool buddies and their drives into Manhattan each day, as it made his life much easier after his liver transplant in 1981. Hughie continued to work at J.P. Morgan in NYC until his retirement in 2009. Thereafter, he was busy in the Oradell, New Jersey Library reading newspapers, books and everything else the librarian thought he would enjoy. Other times, he could be found sitting on his recliner watching the New York Yankees, flipping between sports and CNBC, always keeping his finger on the pulse of the stock market. Once Eleanor retired from her outstanding career, she quickly took up volunteering at her Church, as the Secretary for the Legion of Mary, and also at the St. Francis R.C. Book Shop, run by the Franciscan Friars in New York City. Although Eleanor “technically” retired more than 10 years ago, she always maintained status as a RN, and renewed her licenses in both NYC and NJ, in May of 2020. Both Hughie and Eleanor were Eucharistic Ministers in their parish, St. Joseph of Oradell, and always gave selflessly of their time and energy to help others in need. They were an example to all, judged none and gave endlessly. Relatives and friends are respectfully invited to attend the funeral Mass and Celebration of Life which will commence at 10am on Saturday, October 16, 2021 at St. Joseph Roman Catholic Church located at 300 Elm St, Oradell, NJ 07649. Immediately following Mass, burial will take place at Gate of Heaven Cemetery (Section 28) in Valhalla, NY.

The family of Hugh & Eleanor Flanagan created this Life Tributes page to make it easy to share your memories.

Send flowers to the Flanagan family.