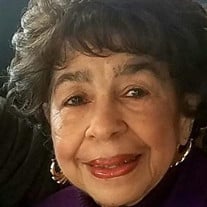 Jacquelyn E. Styles (Bowie), of Teaneck died on February 22, 2020 at the age of 92. Born on December 14, 1927, in Harlem, New York, Jackie (as she was fondly called) was the only child of Arthur Bowie and Perdetha (Dee Dee) Rogers. She attended George Washington High School in New York and was a proud graduate of Howard University in Washington, DC where she received her Bachelor of Arts Degree. After spending time as a devoted care taker for her children, Jackie went on to pursue her Master’s Degree in Social Work at Columbia University in New York City, and became a Licensed Marriage and Family Counselor (LICSW). She began her career with the Riverdale Children’s Association, and moved on to medical social work with the Presbyterian Hospital, both in New York City. Following her move to New Jersey, Jackie joined the staff of Family Counseling Services of Ridgewood & Vicinity where she was responsible for the coordination and clinical supervision of the agency’s social work internship programs. Jackie’s professional accomplishments included an appointment as an Adjunct Assistant Professor at Columbia University School of Social Work, recognition as a Board Diplomate in Clinical Social Work, Licensed Marriage Counselor, member of the Academy of Certified Social Workers and clinical member of the American Association of Marriage and Family Therapists. Jackie had a quarter century of dedicated and professional service to families in New York City and Northern, New Jersey, and she joyfully continued to see clients in her own private practice until she passed. Jackie was married to her best friend and high school sweetheart, James M. Styles, a loving union that spanned over 60 years until his death in 2012. Together, they lived a devoted family and community life in Teaneck. A resident for over 55 years, Jackie was well-known for her local civic activities and dedication to volunteerism and received many awards and recognition for her work. She was a leader in many clubs including The Bergen County Chapter of The Links, Inc. (where she held “Platinum Member” status), and Delta Sigma Theta Sorority. She was also a devout parishioner of Teaneck United Methodist Church, where she served as a Trustee, Group Leader, and Usher for over 40 years. Jackie was a crossword puzzle enthusiast, avid reader, and enjoyed cooking large family meals, and baking. Preceded in death by her husband, James, she is survived by her children, Curtis M. Styles, Rev. Dr. Sharon Styles-Anderson, Esq., three cherished grandchildren (Collin, Kyle, Jameka), and two great grandchildren (Gia and Caiden). Visitation for close family and friends will be held on Thursday, February 27, 2020 from 7pm – 9 pm. A memorial service in her honor will be held on Saturday, March 21, 2020 at 11 am at Teaneck United Methodist Church in Teaneck, NJ.

Jacquelyn E. Styles (Bowie), of Teaneck died on February 22, 2020 at the age of 92. Born on December 14, 1927, in Harlem, New York, Jackie (as she was fondly called) was the only child of Arthur Bowie and Perdetha (Dee Dee) Rogers. She attended... View Obituary & Service Information

The family of Jacquelyn E. Styles created this Life Tributes page to make it easy to share your memories.

Send flowers to the Styles family.