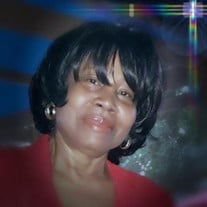 Joan Anesta Noisette, Nee Jeffers, returned to her heavenly home on May 10, 2021. Her devotion to her family and her firm belief in her heavenly father Jesus Christ supported her and ultimately gave her peace. Joan was born to the late Edward and Cassandra Jeffers, in Nevis, West Indies March 2, 1953. Emigrated to Leeds, UK at the age of six where she and her sisters were raised. Joan later emigrated to the United States to be with her sister Sonia while she established a home for herself and her son Malcolm L. Philips. Joan was blessed with a loving husband, Gregory Noisette. Greg met Joan in the US and when Joan decided to move back to the UK, Greg knew he could not be without her and flew to England to ask for her hand in marriage. They were married for 38 years and raised their 2 sons Malcolm L. Philips and Alexander E. Noisette in Teaneck, NJ. She dedicated her children to God and encouraged them to explore the beauty of the gospels. Joan worked in banking industry for more than 15 years. Loved to worship the Lord with her friends and family at the Light House of Faith in Garfield, NJ. Joan was also considered the life of the party no matter where she went! She had the uncanny ability to make you feel at peace and like you were apart of the family for a long time. Joan was a true confidant and she let you know without reservation that she was a servant of the Lord! Joan is survived by her husband, Greg Noisette; Her sons Malcolm Philips, Alexander E. Noisette; Her grandchildren Malcolm Phillips Jr., Ayannah, Amarrah and Alexis Noisette. Her twin sister and brother-in-law, Jean & Everts Podd and sister and brother-in-law, Shirley and John Lynch, brother-in-law Phillip Noisette, her nieces Verta Tross, Tracey King, Charlene Jeffers-Black and nephews, Spencer Tross, Mark Podd, Errol Black, Andre Noisette. Great-Nieces, Daniella & Chara King. She is preceded in death by her sister and brother-in-law, Sonia and Spencer Tross, her parents Edward and Cassandra Jeffers, In-Laws Eugene and Blanche Noisette and brother-in-law Stephan Noisette. The family gratefully welcomes all your prayers and thanks you for all your condolences during this time of grieving and loss.

Joan Anesta Noisette, Nee Jeffers, returned to her heavenly home on May 10, 2021. Her devotion to her family and her firm belief in her heavenly father Jesus Christ supported her and ultimately gave her peace. Joan was born to the late Edward... View Obituary & Service Information

The family of Joan A. Noisette created this Life Tributes page to make it easy to share your memories.

Send flowers to the Noisette family.