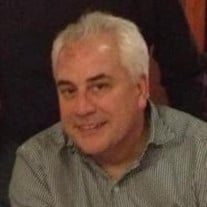 John Francis Keanna, a resident of River Edge, NJ for over 28 years entered into eternal rest on Sunday, September 27, 2020 at the age of 57. Beloved husband of Lori (nee) Sciré for 33 years. Devoted father of Amanda Keanna and her husband Stephen, Christian Keanna, and Jake Keanna. Loving son of Audrey and John Keanna, Sr. Dear brother of Craig Keanna and his wife Erin. John is also survived by his father-in-law Paul Sciré, Sr. and his brother-in-law Paul Sciré and his wife Liliana. Predeceased by his mother-in-law Catherine Sciré. He was the beloved uncle to Claire, Peter, Sarah, and Nina. His memory will be cherished by his many loving family members and friends. Born on April 13, 1963, John was raised in East Rockaway, NY. John was a proud graduate of Chaminade High School and then completed his undergraduate studies at Pace University. John later earned his master’s degree at Fairleigh Dickinson University. After graduating from Pace University, he began his career in finance, working first in accounting, and then in the entertainment and advertising industries in Manhattan for many years. He finished his career as a Chief Financial Officer in New Jersey. The highlight of his career came in recent years when John began serving as an adjunct professor of finance and accounting at the College of Mount Saint Vincent in the Bronx. John always had a passion for teaching and was overjoyed when this opportunity arose. Teaching was truly one of the greatest callings in his life. During this time, John also became an Associate of the Sisters of Charity of New York. He was extremely passionate about helping others and was looking forward to completing a mission trip to Guatemala with the Sisters of Charity in the upcoming years. John was a kind-hearted and generous man who made everyone who had the good fortune of knowing him feel cared for and put at ease. He was a longtime and active parishioner of St. Peter the Apostle Roman Catholic Church in River Edge and enjoyed being the director of the parish’s youth basketball program for many years while being the basketball coach for all three of his children and their friends. John was an avid sports fan and enjoyed traveling the country going to various sporting events with his family and friends. He was part of the Lot B New York Giants tailgate family, also known as the “Boneyard” crew due to the chicken bones left on the site from previous tailgates. He was always one of the first cars in line at MetLife stadium on the mornings of Giants home games ready to start the tailgate. He will be fondly remembered walking around the tailgates with a smile, telling everyone he came across to “Eat, eat” whatever he and his tailgate crew were cooking. John was also an avid New York Yankees fan and loved cheering on his favorite teams in the Bundesliga (Germany’s premier soccer league) and in the World Cup. He also proudly ran three New York City marathons. John put his heart and soul into the things that were important to him in life and so he gave everything he had to the people around him. He went out of his way at work and in his community to get to know people who otherwise might go unnoticed. No matter how old his children got, he always said, “Be nice to the new kids” at the beginning of each school year. He had a soft spot in his heart for children, the elderly, and dogs (whom he would always insist on playing with no matter what else was going on). John made sure everyone he interacted with knew that he cared about them. John’s greatest joy in life was spending time with his wife and children. He will be so deeply missed by the many people whose lives he touched. In light of the health concerns of today, the family will be holding services privately. A memorial service celebrating John’s life will be held at a later date. Since being an Associate of the Sisters of Charity of New York held such a special meaning for John, in lieu of flowers, donations can be made to one of their many ministries such as St. Joseph’s Medical Center in Yonkers, NY (http://www.saintjosephs.org/about-us/ways-to-give/donate) and the Guatemala Mission (https://scny.org/donate/).

John Francis Keanna, a resident of River Edge, NJ for over 28 years entered into eternal rest on Sunday, September 27, 2020 at the age of 57. Beloved husband of Lori (nee) Sciré for 33 years. Devoted father of Amanda Keanna and her husband... View Obituary & Service Information

The family of John Francis Keanna created this Life Tributes page to make it easy to share your memories.

John Francis Keanna, a resident of River Edge, NJ for over 28...

Send flowers to the Keanna family.