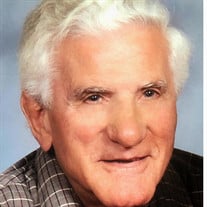 John T. Ziffer, 97, of Lakewood, formerly of Teaneck, passed away peacefully on April 25. He was born in NYC and lived in the Washington Heights section of Manhattan with his wife and family until 1956, when they moved to Teaneck. After raising their three children there, John and his wife retired to Lion's Head Woods in Lakewood in 1989. John graduated from George Washington High School in 1940. He worked in the fur coat industry for several years before being drafted into the US Army. John served his country in WWII as a Platoon Sergeant with the 87th Infantry, an integral part of General Patton's Third Army. He earned numerous medals and awards, including the Legion of Merit (only two were awarded in a division of thousands of soldiers) and two Bronze Stars, a testament to his bravery, leadership and devotion. These were earned during the Battle of the Bulge, from which only 10 men out of his original company of 200 returned. After the war, John and Virginia were married. John and a friend formed Arista Furs, a coat manufacturer. He remained in this business for 42 years, until he retired. He was a member of St. Barbara's Greek Orthodox Church in Toms River for 30 years. John enjoyed his well-deserved retirement. His greatest loves were his family and friends. His interests and hobbies included, taking cruises with his wife, golf, bowling, bocci, playing poker, bingo, harness racing, the Jersey Shore, shows and dinner in Atlantic City, being a member of the Lion's Head Woods Men's Club and serving on a variety of committees. Beloved husband of 72 years to the late Virginia Ziffer, nee Baldji. Devoted father of George, his wife Jill, Stephanie Langbein, Peter and his wife Tina. Loving grandfather of Jeannine, her husband David, Christopher, his wife Alisia, Brad, Christa, her husband Michael and Peter Jr., “PJ.” Cherished great grandfather of Andrew, James, John, Emily, Charlee, Jaxon and Jacob. Predeceased by his sisters Beatrice Cosmos, Anita Gregor, Jay Thompson, and his brothers Thomas and Constantine.

John T. Ziffer, 97, of Lakewood, formerly of Teaneck, passed away peacefully on April 25. He was born in NYC and lived in the Washington Heights section of Manhattan with his wife and family until 1956, when they moved to Teaneck. After raising... View Obituary & Service Information

The family of John T. Ziffer created this Life Tributes page to make it easy to share your memories.

Send flowers to the Ziffer family.