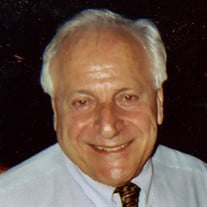 Joseph V. Manis, Semper Fi, concluded his 92 year earthly tour of duty on Nov 21, 2019 and continues on his journey, at peace, to share in the eternal light of our Lord. Joe, determined to serve his country, enlisted in the military at age 15, telling his recruiter he was of legal age. Much to Joe’s chagrin, his mother informed the recruiter of his real age. Once of legal age, Joe did enlist in the Navy in 1944 and then in the U.S. Marine Corp in 1946 where he served for 23 years, rising to the rank of Lt Colonel before retiring. Joe valiantly served in combat during the Korean war. He was a Communication Specialist where he became Chief, and then Executive Officer of Operations of The Defense Communications Agency. He became a Commanding Officer of a Supply and Maintenance Battalion, in charge of 1,200 officers and men in support of a Fleet Marine Force. He served as Deputy for Marine Recruiting for most of the New England states, and as the Director of the Marines Operational Communications School. Joe was the recipient of numerous medals, commendations and citations during his military career: the WWII Victory Medal, the Korean Service Medal with 3 Stars, the United Nations Service Medal, the American Campaign Medal, the National Defense Medal, the Joint Service Medal, the Presidential Unit Citation Medal with 2 Stars, and the Marine Corp Reserves Medal, just to name a few. In 1977, Joe earned a B.S. in Sociology from the University of Maryland. After the military, he had 2 more careers, one establishing and directing Half-way Houses in the DC and Baltimore areas, and another with Catholic Community Services in the Archdiocese of Newark. He retired from the latter in 1992. Joe’s life was a life dedicated to service, service to his country, service to the disenfranchised, and service to those with special needs. Joe was also a proponent of a healthy, natural, balanced lifestyle and was a self-taught expert in Naturopathic medicine. He incorporated exercise into his lifestyle and was a fixture at Gold’s Gym in Paramus. In his 80’s, Joe was in better shape than most men half his age. He was a devoted husband to Barbara for 37 years, and was, with her, committed to his faith journey. He was an active parishioner at St John The Baptist in Hillsdale where they enjoyed singing in the choir together. He also served as the Chair of the Pastoral Council. Joe and Barbara were the best dinner companions, since Joe was an excellent cook. They were the consummate entertainers at Christmas time, with Joe preparing gastronomical feasts that they served their friends in their banquet-sized dining room. He and Barbara spent 35 years in a historic home in Hillsdale. Another of his passions was caring for that home and their gardens with his talents and skills, again self-taught. They loved to go on cruises and did their dream cruise on a Viking longship in Europe. Joe was blessed with four children from his predeceased first wife, Dolores: Debbie Kalinowski, Becky Manis Porter, Pam Wilson and Joseph Manis III; five grandchildren: Adam Kalinowski, Kayla, Kirsten and Liam Wilson and Michael Manis. He is survived by his brother Rick, his wife Maryanne, two nephews, Jeffrey and Jarret and one niece, Jessica, as well as his predeceased sister Elaine Pronel’s children, Lanie and Lynne. His brother John and nephew Steven (son of Elaine) predeceased him. Joe was tough-as-nails, but was the most dedicated and caring friend you could ever ask for, forgiving, understanding, loving, and always expressing concern for your well-being before his own. He was the epitome of the Marine Corps Values: honor, courage and commitment. Semper Fi, Lt Colonel Joseph Vincent Manis.

Joseph V. Manis, Semper Fi, concluded his 92 year earthly tour of duty on Nov 21, 2019 and continues on his journey, at peace, to share in the eternal light of our Lord. Joe, determined to serve his country, enlisted in the military at age... View Obituary & Service Information

The family of Joseph V Manis created this Life Tributes page to make it easy to share your memories.

Send flowers to the Manis family.