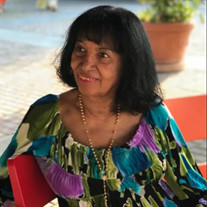 Marie Josette Frédéric was the youngest of nine children born on January 4,1936 in Jérémie, Haiti to Thomas Frédéric and Brunette Frédéric (née Mauclair). As the youngest child and one of the youngest cousins, Josette was the apple of her family’s eye. Josette was proud of being from Jérémie, which is often referred to as la ville des poètes (the city of poets). Thomas and Brunette eventually relocated with their younger children to the city, Port-au-Prince. Josette continued to blossom as a young lady as she loved to sing and dance. Josette’s gregarious personality made her very popular amongst her peers at Institution du Sacré-Coeur where she completed her studies in rhetoric and philosophie, which would be the equivalent of a college degree in the United States. Josette continued her studies at Crane Business School where she earned a degree in business and secretarial studies. Josette went on to establish a stellar record as an employee at Imprimerie de l’État in Port-au-Prince. In 1958, Mademoiselle Frédéric wed Monsieur Fritz Berthoumieux. Through this union, they had three sons, Hans, Gardy and Ronald who she often referred to as her three princes. In 1967, Josette took a leap of faith by relocating to the United States. She settled in Brooklyn, New York where she resided until 1992 when she moved to New Jersey. As a doting mother of three boys, Josette still longed for a baby girl. Her prayers were answered when her union with Emile Lavache produced their only daughter, Claire Jacqueline, who she named after the patron Saint Clare of Assisi. Through the challenges of rearing four young children as a single mother, Josette went back to school to learn English and she eventually earned numerous higher learning certificates from Laguardia Community College and Star Computer Institute. One of Josette’s proudest moments was when she passed her citizenship test and became an American citizen. Despite the tumultuous times that Josette experienced in life, she remained steadfast in her love for God and her faith that “all things work for good for those who love the Lord and are called according to His purpose.” It was also very important to Josette that her children had a relationship with God and were good-hearted people. Josette loved her children and grandchildren beyond measure. In fact, they were the greatest joys of her life and the mere mention of either of their names would put a smile on her face. She was their biggest prayer warrior and cheerleader. Although Josette was one of the sweetest women on Earth, she was a fierce protector of her family. Her love for her family also extended to her nieces and nephews who she loved immensely. Josette loved to travel, especially with her children. Her fondest memories included going to Disney World for the first time with her son Hans and his family, going to Las Vegas with her daughter and granddaughters and going to Italy to attend her eldest granddaughter’s wedding. Josette was preceded in death by her parents Thomas and Brunette; her siblings Wagner, Maxan, Lena, Fernande, Edith, Pierre, Clorinde and Louis. Josette leaves behind to carry on her legacy and cherish her memories her children Hans (Sandra); Gardy (Kenetta); Ronald (Ana) and Claire Jacqueline (Andrew); her grandchildren Ashley (Marco), English, Spencer, Jada, Garrett, Deveraux and Lauren; her great-granddaughter Stella and an extended village of beloved nieces, nephews, cousins and friends. A special recognition to Josette’s nieces Beatrice, Jeannie, Marie-Carmelle and Nathalie and her nephews Francis and Al for the special bond they shared with her. Josette will remain in our hearts forever.

The family of Josette Berthoumieux created this Life Tributes page to make it easy to share your memories.

Send flowers to the Berthoumieux family.