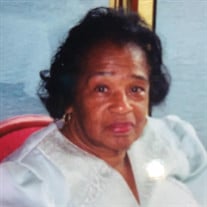 Juanita E. (Kirkpatrick) Brooks was born on June 16, 1929, in Hertford, North Carolina. She departed this life on Sunday, October 20, 2019 at the wonderfully-significant and milestone age of 90 years old, at Commonwealth Senior Living at Leigh Hall, in Norfolk, Virginia. At the young age of 12, Juanita tragically lost her Birth Mother to Natural Causes – and, the Family then moved North to Hackensack, New Jersey with her Father, Rev. Clifford M. Kirkpatrick – and her Brother, Clifford, Jr. -- where she then matriculated and was a proud graduate of Hackensack High School. While growing up as a young woman, Juanita accepted Christ at a very early age. While matriculating at Hackensack High School, Juanita had decided long ago, that her work and life’s concentration would be in the field of Nursing. After graduating from high school as a dedicated and excellent student, Juanita first spent a brief year of study at Hampton University, and then swiftly matriculated at the Jersey City State College School of Nursing, in Jersey City, New Jersey -- promptly graduating with an Associate’s Degree in Nursing. Upon completion of her degree program at Jersey City State, Juanita was then accepted to the prestigious Big 10 Registered Nurses’ Degree Program, at the University of Michigan. During her student years at Michigan, Juanita also discovered the Sorority Sisterhood – and, pledged to become a beloved member of Alpha Kappa Alpha Sorority, Inc. Also in the midst of her time at Michigan, the Korean War Conflict emerged -- and was quite interruptive to so many, back in 1952, including her -- thus, causing Juanita to enter into Service with the United States Navy, as a Naval Nurse – stationed at the renowned Great Lakes Naval Base. Juanita left the US Navy Honorably, with the rank of 1st Lieutenant. After graduation from University of Michigan with her 4-Year RN Degree, Juanita returned back East – and, accepted her first “Public” Nursing Position with the Visiting Nurse’s Association (VNA), in Brooklyn, New York. While in the midst of her career at the VNA, Juanita was able to settle in to the New York community wonderfully. During this time, she reconnected with a dashing and prominent Banker and New York Businessman also in the area, whom she had initially met at Hampton University, named Ernest L. Brooks -- who held the honor of being the First-Ever African-American Branch Manager ever hired, by the Chase Manhattan Bank, N.A., in the early 1960’s. Eventually, they were united in marriage during September of 1962 -- and were married for over 39 happy years -- until they were sadly parted by the preceding death of Ernest, in April of 2001. After a brief stay together in Queens/East Elmhurst, NY, the family would eventually make their permanent home in Teaneck, NJ – where Juanita promptly accepted a position as the Head Nurse of the Holy Name Hospital’s Nursery Ward, in Teaneck, NJ -- and was very active, by assuming several responsibilities of leadership, where she would eventually Retire -- after touching, guiding and shaping countless Newborn Lives, along the way – and, delivering numerous years of faithful and diligent service, to the entire community-at-large. Juanita leaves to cherish her loving memories: Her Son, Derek E. Brooks and her Daughter-in-Law, Alexis Brooks; her Daughter, Dina K. Anderson and her Son-in-Law, Kevin Anderson; her Grandchildren, Diamond and Miles Anderson; and a host of extended family, colleagues, fellow church parishioners, lifelong neighbors, admirers, and friends. She will most certainly be missed, and perpetually remembered by the entire Community.

Juanita E. (Kirkpatrick) Brooks was born on June 16, 1929, in Hertford, North Carolina. She departed this life on Sunday, October 20, 2019 at the wonderfully-significant and milestone age of 90 years old, at Commonwealth Senior Living at Leigh... View Obituary & Service Information

The family of Juanita E. Brooks created this Life Tributes page to make it easy to share your memories.

Send flowers to the Brooks family.