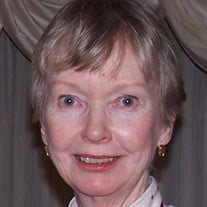 On Tuesday, November 24, 2020, Lenore O’Reilly, 87, loving daughter of John and Kathleen O’Reilly, passed-away peacefully in her sleep. She is predeceased by her siblings, John (Jay) O’Reilly, Anne Russell, Maureen Hoare, Michael O’Reilly, and Frank O’Reilly. She joins her parents, brothers, and sisters in eternal rest. She was a loving aunt to and is survived by 14 nieces and nephews, and 15 grand and great nieces and nephews. Born in 1933, Lenore was the second eldest daughter of six children who were raised in a loving home by parents who immigrated to the United States from Ireland. Faith was a central component in Lenore’s life, and it was cultivated in a home replete with Irish heritage. Her attendance at mass was evidence of her deep devotion, along with her great generosity to various charities. She worshiped daily at her beloved Saint Anastasia’s Roman Catholic Church since 1940 when her family moved to Teaneck NJ. Lenore resided in her family home until her passing. Lenore was devoted to her family, and her nieces and nephews were blessed with her presence throughout their lives. She never missed a family event or holiday, and was quick with warm hugs, smiles, a gentle spirit, and grace. Lenore was a terrific cook and baker, and her chocolate chip cookies and apple pies were unrivaled. Many a family gathering was enriched by her presence! Lenore also lived a rich professional life. After graduating high school, she enrolled in the FBI training academy and was chosen to become a member of “the Bureau” as she called it. She was honored to have met J. Edgar Hoover and Richard Nixon during her career. Lenore retired from the FBI after 30 years of service to take care of her aging parents. Lenore’s loving devotion to her family, her grace, and gentle spirit will be greatly missed (along with her amazing cookies!). Private services will be held in the coming days. A wider “Celebration of Life” gathering will be announced for a future date.

The family of Lenore Bernadette O'Reilly created this Life Tributes page to make it easy to share your memories.

Send flowers to the O'Reilly family.