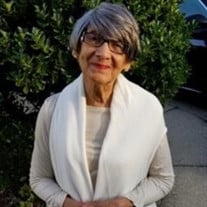 A Time to be Born Leola Graham Linnen, was born in Savannah, Georgia on October 29, 1933 to the loving White family of Beaufort County, South Carolina She was raised and nurtured though out her formative years by her Grandmother Judy, Uncle... View Obituary & Service Information

The family of Leola Graham Linnen created this Life Tributes page to make it easy to share your memories.

A Time to be Born
Leola Graham Linnen, was born in Savannah,...

Send flowers to the Linnen family.