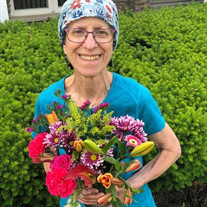 With sad hearts, Leonard and Daniel Bogan, announce the passing of their devoted wife and mother, Linda Christine, daughter of the late Paul and Christine Schwarzbach. Born in Queens, Linda grew up in Teaneck and then lived in River Edge for over 40 years. Linda was a Kindergarten Instructional Aide at Roosevelt School, River Edge, for 16 years, and then worked as a paraprofessional at Fairview Elementary School, Bloomfield, NJ, where she touched the lives of hundreds of young students, and was well-known for her "Cooking through the Alphabet" and origami workshops. She was happiest in the kitchen, baking give-away treats, such as a pan of brownies or batch of cookies...and lucky you were if you were the recipient! A longtime member of Origami USA gave her the opportunity to travel to the Netherlands, Hungary as well as throughout the US to meet and fold with friends. Linda believed strongly in spreading kindness, whether through a plate of cookies, a bunch of origami folded flowers, or other small gestures. She loved to spend many happy afternoons at Wave Hill, enjoying the picturesque gardens. Her son, Daniel, always made sure that the gardens in her own yard were as beautiful, as well. When her health started to decline, her spirit and courage stayed strong and she amazed all who knew her. She was especially grateful to her faithful sister Cynthia, her caring niece Sarah, her dearest friend Joanne Sullivan, her origami pals Kathy Wallace, Gay, Juliana and Candy, Becky Berman's trio of amazing daughters Diane, Julie and Irene, long-time friend Susan Dobriner, and Dr. Robin. Most recently, she also had deep gratitude for her angel caregivers from the Valley Hospice, her nurse Cindy and her team, as well as Dr. Wang, Sheba, Jen and the entire staff at Memorial Sloan Kettering/Bergen. As Maya Angelou has written, "Try to be a rainbow in someone else's cloud." Linda has done just that...and challenges you to do the same... Spread kindness and joy and to be that rainbow in the world. In lieu of flowers, a memorial donation can be made in Linda's name to a charity of your choice.

With sad hearts, Leonard and Daniel Bogan, announce the passing of their devoted wife and mother, Linda Christine, daughter of the late Paul and Christine Schwarzbach. Born in Queens, Linda grew up in Teaneck and then lived in River Edge for... View Obituary & Service Information

The family of Linda C. Bogan created this Life Tributes page to make it easy to share your memories.

With sad hearts, Leonard and Daniel Bogan, announce the passing...

Send flowers to the Bogan family.