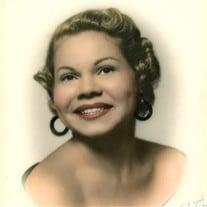 Margaret Watts Prillerman Gerrard, New Jersey Realtor whose passion for years was finding the “right” home (not house) for her clients, died at her home in Englewood Cliffs, New Jersey on Saturday, October 26, 2019, after a long illness. Marge, at 96, had been blessed with the gift of a long and fruitful life. Trained and licensed as an Interior Decorator and New Jersey Realtor, Marge spent many years helping hundreds of New Jersey residents find the right house to make home in and guiding hundreds of others in beautifying their homes with the right colors, designs of furniture, and art. Marge was one among a small group of realtors who not once, but several times over her career, received Sales Achievement of the Year award, in 1984 and 1985, Associate of the Month, June 1991, and August 1992. She achieved status in the coveted “Million Dollar Club,” each year from 1983-86 and 1988. Marge retired at age 83. Margaret “Marge” Watts Prillerman Gerrard entered this life on August 13, 1923, in Portsmouth, Virginia. She was the 4th child born to Elmer G. and Margaret Brown Watts. She graduated from high school in Portsmouth, Virginia and attended college at Virginia Union University. Marge, known for her strong, outgoing personality, was a great family person and dedicated friend. She was also a conscientious contributor to many charitable organizations. Her belief that she had been blessed with a wonderful life led her to share some of those blessings with others. Marge loved to spend time with her family and friends who will always remember the lively, charming, beautiful woman who once appeared in Jet Magazine. Marge and her sister Bertha were married to brothers, Eddie and Robert Gerrard. Marge is survived by: two beloved daughters, Cheryl Prillerman Walker-Chambers and Heidi Gerrard Ferrell (Todd Ferrell); grandson Ramsey Franklin, III; sister, Carleen Watts Holmes; niece and caregiver, Darlene McClendon; and a host of family, cousins, nieces, nephews and friends. Marge was predeceased in death by her husband, Edward Jerome Gerrard; brothers, Herman Watts and George E. Watts; and sister Bertha Watts Gerrard. Margaret “Marge” Watts Prillerman Gerrard…. a beloved wife, mother, sister, cousin, and friend. We will always cherish our memories of her and the times that we were “Blessed” to share.

Margaret Watts Prillerman Gerrard, New Jersey Realtor whose passion for years was finding the &#8220;right&#8221; home (not house) for her clients, died at her home in Englewood Cliffs, New Jersey on Saturday, October 26, 2019, after a long... View Obituary & Service Information

The family of Margaret V. Gerrard created this Life Tributes page to make it easy to share your memories.

Send flowers to the Gerrard family.