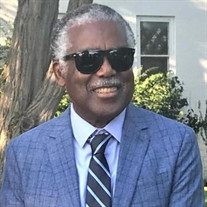 Dr. Neville Parker, a Tower of College STEM Education for People of Color, Dies at 81 Dr. Neville Anthony Parker, a tower of college STEM education for students of color, passed away peacefully on Sunday, September 26, in Teaneck, New Jersey, at the age of 81. He is survived by his most loving wife Aethnae of 54 years, his four children Adenike, Kwame, Ayanna, and Maisha, six grandchildren Adisa, Tarik, Nandi, Neenah, Neville, and Selwyn, sisters Maria and Althea, and his beloved nieces, nephews, cousins, and a tribe of close family friends. Born on November 22, 1939, Dr. Parker spent his formative years at Bishops High School in Scarborough, Tobago; here were laid the foundations of his thirst for knowledge and his caring for family and community. After graduating from high school, he emigrated to the United States to attend the City University of New York (“CCNY”), part of the City University of New York (“CUNY”), in 1959. Starting out at CCNY’s evening division, Dr Parker overcame many odds to become one of the school’s few people of color to receive an engineering degree during the civil rights era. He received his B.E. in Civil Engineering from CCNY in 1965, his M.E. in Transportation Engineering from Cornell University in 1966, and his Ph.D. in Systems Engineering from Cornell in 1971. In addition to his academic achievements, Dr. Parker also served as an ROTC cadet, and after graduation he was commissioned as a Second Lieutenant in the U.S. Army Corps of Engineers. He later rose to the rank of Captain and was awarded a National Defense Service Medal and an Army Commendation Medal. After receiving his Ph.D. from Cornell, Dr. Parker began his civilian career as a Professor of Civil Engineering at Howard University. He remained at Howard until 1976 when, at the request of the first President of Tanzania, Julius Nyerere – whom he had met in 1974 when Tanzania hosted the 6th Pan African Congress – he moved his family to Dar es Salaam as a Senior Fulbright Scholar. There he served as the Head of the Department of Civil Engineering and later as the Dean of the School of Engineering. He took up the challenge of training the first generation of East African engineers, many of whom have gone on to make significant contributions to business, education, and government in the region. Dr. Parker remained at the University of Dar Es Salaam until 1988, when he returned to the United States to assume position of Associate Director of the Institute of Transportation Systems and Professor of Civil Engineering at The City College of New York. In 1989, he was appointed Director of the Institute, which flourished under his leadership and gained international recognition for its research and training activities. He was also appointed Acting Principal Investigator and Director of the University Transportation Research Center (“UTRC”) for US Northeast. As regional Director of the Transportation Careers Pipeline Initiative Program of the UTRC, Dr. Parker led the effort to target graduate and undergraduate students from university and community colleges, professionals, sub-professionals, and 10th-12th grade high school students for its pipeline for preparing transportation professionals. Throughout his four-decade teaching career, Dr. Parker has taught courses such as courses such as railways, port and airport engineering; construction management, route location engineering and design; project feasibility analysis; engineering systems analysis; urban systems engineering; pavement design and management. Dr. Parker’s greatest contribution to CCNY, CUNY and the nation has been in the development of underrepresented minorities for careers in science, engineering, mathematics and technology. He directed the National Science Foundation-supported New York Louis Stokes Alliance since its inception in November of 1992, through which in excess of 17,000 baccalaureate degrees have been awarded to underrepresented minority students. His many students and mentees have described him as warm, caring, invested in their careers, and always willing to provide practical advice in their personal and professional lives. Dr. Parker received numerous awards as an educator and researcher. He was profiled in Transportation Research News, January-February, 2000; received the prestigious “1996 Giants In Science Award,” from the Quality Education for Minorities in Engineering network; the “1994 Black Engineer of the Year – Outstanding Education, College Level” from the Career Communications group, the “Outstanding Educator Award” during the 20th Anniversary Harlem Week celebration at City Hall in 1994; and the “Career Achievement Award” from the CCNY Engineering School Alumni also in 1994. He is co-author of the textbook Essentials of Highway Engineering (McMillan, 1988). Other honors include the Council of University Transportation Centers’ 2015 CUTC Award for Distinguished Contribution to University Transportation Education and Research, and the Townsend Harris Medal, given by CCNY to distinguished alumni. Outside of his significant academic and professional achievements, Dr. Parker was an accomplished All-American college soccer star, an avid tennis player in his later years, an amateur photographer, a gifted gardener, a surprisingly good dancer, and a true lover of calypso – the traditional music of Trinidad & Tobago – having been both a member of the Our Boys Steel Band in his youth and a modest calypso guitarist. A man of powerful intellect, steadfast character and impeccable morals, Dr. Parker was consistent in challenging all with whom he interacted to be their best selves. He touched the lives of many, and his absence will be sorely felt.

The family of Neville Anthony Parker created this Life Tributes page to make it easy to share your memories.

Send flowers to the Parker family.