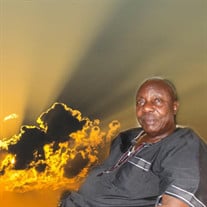 Obituary for Cum Paul Mutiva Lovingly referred to as “Kekonyango,” by his father, C. Paul Mutiva will be forever remembered, loved, and missed. Born in Maseno, Kenya on November 27, 1939, with the African given name Chegome, he passed away suddenly on May 10, 2020, as a long time resident of New Jersey. A graduate of Berea College, he worked as an accomplished educator for the New York City Board of Education for 32 years. In fact, he won the 1975 New York City Science Teacher of the Year award. He was also a fervent entrepreneur, owning several businesses over time including a tax service, an insurance agency, a travel agency, a night club, as well as, owning multiple residential and commercial real estate properties. He was charismatic and a born entertainer. He often hosted boisterous get-togethers in his home where many enjoyed good times, with great food, drinks, and music. He also enjoyed traveling, golfing, tennis, hunting, fishing and playing the guitar. He was a generous and loving mentor to countless. He embraced and sponsored more than 20 people from Africa to give them the opportunity of getting a better education. He often encouraged others with his personal motto of; “whatever you do, be the best” and “nobody should mess with your good name.” He was a devoted husband, father, and Guga (grandfather). He had a large immediate and extended family. He is survived by his wife Elizabeth, and his children: Charles P. and his wife Karen, Rosemary R. Ocansey and her husband Kofi, Stanely, Sophia Dario and her husband Daniele, Jeffrey and his wife Natasha, Rafikieli “Kiki” Dennehy and her husband Nicholas, and Eric T. He also has a host of grandchildren and great grandchildren. His surviving siblings are his brother Aggrey Ombeva and his wife Mary; sisters: Jessica Kavetza, Florence Afandi, and sister-in law Enighenja Mkaze. He now joins the heavenly realm with his late parents: Christopher & Respah, and his other siblings including brothers: Peter Khama, Hynes Agade, Patrick Olindo; and sisters: Ruth Kivali Ambula, Vera Kanaiza, Paulina Kadiga, and Lydia Jendeka. Arrangements are made through Volk Leber Funeral Home, Teaneck. Given the challenging times we are dealing with, a traditional burial will be held at the family home in Kenya at a later date. We are grateful for donations in his memory, which can be made for this cause Here

Webcast starts at approximately 10:00 AM EST on Saturday, May 16th

Lovingly referred to as “Kekonyango,”...

Send flowers to the Mutiva family.