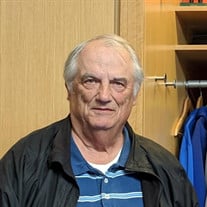 Peter Allan Wolfe, 79, died on January 28, 2022. He was born in Teaneck, NJ on May 10, 1942, the son of Paul and Viola (née, Ahr) Wolfe, both of whom predeceased him. He was raised in Oradell, NJ and graduated from River Dell High School. He attended NYU and earned a BS in Business. While there he was a walk-on for the soccer team, quickly earning a starting position. Upon graduating, he had a 40-year career in advertising, working in New York City. He loved all sports and played soccer and baseball. He was active in the Biddy Basketball and Little League for most of his adult life, ensuring that today’s kids had plenty of playing opportunities. He loved going to the shore and spent much time with his family at various spots, although Sandy Hook was his favorite. He enjoyed his family, spending much of his free time visiting and vacationing with them. He had a tremendously kind and generous heart, and nothing was ever too much to ask him for, whether it was picking up someone on a late arriving flight, driving 90 minutes to deliver bagels, sending an article about a topic of interest, or loaning his car. He was incredibly well read, with an in-depth knowledge of a vast array of subjects. If he didn’t know something he would invest the time needed to research the topic and understand it. He was also a dedicated, loyal, and hard worker, forming strong friendships with his co-workers and his clients, and still working until just days before his death. He is survived by his daughter Susan Wolfe (Kevin Sarsany) of River Forest, IL, his son Michael Wolfe (Sharon) of Hackensack, NJ, his sisters Karen Hines (Charles) of East Granby Connecticut and Heidi Plinio (Robert) of Dumont, his brother, Robert Wolfe (Marlene) of Oradell, his five grandchildren, Morgan, Riley, Haley, Benjamin and Jessica, as well as his nephews and nieces, David, Kristin, Cheryl, Kaitlyn, Melissa, Jesse, and Carolyn. He is predeceased by his ex-wife Barbara Joan (née Eggleston) Boudette. Services will be held on Friday, February 11, 2022 with visitation from 9am-noon, followed by a service, at Volk Leber Funeral Home, 268 Kinderkamack Rd., Oradell, NJ 07649. In lieu of flowers, please consider donating to the St. Jude’s Children’s Research Hospital.

Peter Allan Wolfe, 79, died on January 28, 2022. He was born in Teaneck, NJ on May 10, 1942, the son of Paul and Viola (née, Ahr) Wolfe, both of whom predeceased him. He was raised in Oradell, NJ and graduated from River Dell High School. He... View Obituary & Service Information

The family of Peter A. Wolfe created this Life Tributes page to make it easy to share your memories.

Send flowers to the Wolfe family.