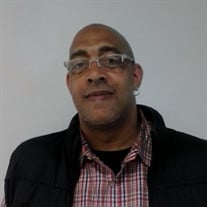 Richard David Harris was born January 31, 1962 to David Draper and Jeanne Harris, in Englewood New Jersey. After graduating Dwight Morrow High School in 1980, Richard went to serve in the U.S Navy. Upon his return from duty, Richard attended New York City technical College where he studied to be a plumbing engineer. Throughout his life Richard lived and worked in New York, New Jersey, Arizona,California and Pennsylvania, where he last resided until being called home. Richard Enjoyed sports, most importantly Baseball and Football. He was “A Saints Fan to his heart” as he would always say. Richard was very well-known since he was so outgoing, friendly and charming. Whether you met him once, or were a part of his life, he left a lasting impression on you with his corny jokes, ”singing”, and his boisterous laughter. He always made sure to leave you in a good mood especially after one of his bear hugs. Richard is reunited with his father David Draper; Survived by his mother Jeanne Harris; two children Christina Harris and Shavonne Smith. Sixteen siblings: Raymond Harris, Kathy Williams, Regina Lee, Elaine Turner; Tonya Osbourne; David, James, Christine, Jerry, Anthony, Dreward, Tiffany, and Tosha Draper; Nathaline, Yvonne, and Sandy Anderson; Many nieces, nephews, cousins, and an abundance of friends and acquaintances. He shall truly be missed.

The family of Richard D. Harris created this Life Tributes page to make it easy to share your memories.

Send flowers to the Harris family.