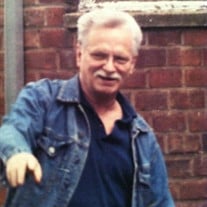 Robert E Deininger, 75, of Teaneck, passed away on June 23rd surrounded by his loving family. He was born to parents Harvard and Mary Deininger, on February 21, 1944 in Paterson, NJ. Robert (Bob) graduated from Teaneck High school. He was employed by The Postal Service as a mailman for several years and Sears as a Technician until he retired. He married Nancy, the love of his life in April of 1967, who survives him. Together they made a happy home and created a beautiful loving family and a lifetime of memories. Robert is also survived by his daughter Samantha and husband Kenneth, his daughter Jennifer and husband Christopher, his son Andrew and his wife Gaby. His grandchildren whom he loved to the moon and beyond: Nicole; Breanna; Kelsey; Chloe; Christopher Jr.; Holly; Kenneth; and Adam. He is survived by his Brother David Deininger, his sister Maryjo Thrun and Sister in-law Rosalie Demartino and husband Joe. Survived by his loyal best friend, companion, and support dog Tony. Robert is also survived by several nieces and nephews and friends. Robert made regular donations to various charities through the years. He was known for his love of baseball, especially the Yankees, never missing a game and keeping his own stats on all the players, it was always a joy to watch a game with him and share in his enthusiasm. Robert was a very selfless husband, father, grandfather and friend. He gave and never took or asked for anything in return other than love. His family's happiness always came first. He was devoted to Jesus and spoke frequently of scriptures and passages and God. He led many to the love and understanding of the Lord, which many are grateful to this day to Robert for this. Everyone who knew Robert has a story whether it be about his way out-there sense of humor, a loving gesture, a fishing trip, hanging with grandpa, or just a lazy afternoon with good conversation. Robert will be missed by many and his memory will be cherished, and he will be thought of and spoken of always. The family would like to thank Holy Name Hospital, Sister Breda, and the ICU unit nurses and medical doctors and Palliative care who so lovingly cared for Robert and help comfort his family. The memorial service will be held on Sunday July 7th, at 10:00 am at Volk Leber Funeral Home in Teaneck. The family requests you dress causal and if you have any Yankee attire please wear it to the memorial.

Robert E Deininger, 75, of Teaneck, passed away on June 23rd surrounded by his loving family. He was born to parents Harvard and Mary Deininger, on February 21, 1944 in Paterson, NJ. Robert (Bob) graduated from Teaneck High school. He was employed... View Obituary & Service Information

The family of Robert E. Deininger created this Life Tributes page to make it easy to share your memories.

Send flowers to the Deininger family.