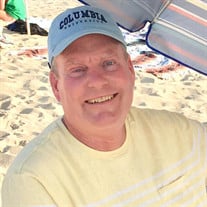 Robert Emmett O’Brien, a long-time resident of Teaneck, NJ, passed away on September 13, 2021, at Holy Name Medical Center in Teaneck. He was 59 years old. Known as Bob or Bobby, Robert was born in New York City and raised in Teaneck, where he was a lifelong member of Saint Anastasia Roman Catholic Church. He attended St. Anastasia School, Thomas Jefferson Middle School, and Teaneck High School, and earned a BFA in graphic design from Pratt Institute in Brooklyn. Robert enjoyed his work as a graphic designer at several book, magazine, and newspaper publishers, including Van Nostrand Reinhold, Sports Media, Professional Sports Publications, and Marshall Cavendish. Most recently, he worked at the Jewish Standard for more than 10 years. An avid and accomplished gardener, Robert was a longtime member of the Teaneck Garden Club. At St. Anastasia, he served on the Parish Council and was a member of the Bowery mission. He savored his summer vacations to Cape Cod, his “happy place.” Above all he cherished his family, friends, and neighbors, who will sorely miss his big voice, distinctive accent, and lively sense of humor. Predeceased by his parents Mary (O’Grady) and Francis O’Brien and his eldest brother Frank O’Brien, Robert is survived by wife Joy and daughter Maria; siblings Noreen (Walter) Bosshardt, Sean, James (Barbara), and Patrick; sister-in-law Rosalie; and many beloved nieces, nephews, and cousins. Visitation this Sunday from 3-5pm and 7-9pm at Volk Leber Funeral Home, 789 Teaneck Road, Teaneck. Mass of Christian Burial at 10am on Monday, September 20th, at St. Anastasia Church in Teaneck. Burial to follow at George Washington Memorial Park in Paramus. In lieu of flowers, donations may be made to the Office of Concern Food Pantry at St. Cecilia’s Church in Englewood at www.officeofconcern.com.

Robert Emmett O&#8217;Brien, a long-time resident of Teaneck, NJ, passed away on September 13, 2021, at Holy Name Medical Center in Teaneck. He was 59 years old. Known as Bob or Bobby, Robert was born in New York City and raised in Teaneck,... View Obituary & Service Information

The family of Robert E. O'Brien created this Life Tributes page to make it easy to share your memories.

Send flowers to the O'Brien family.