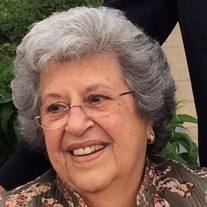 Rosalie M. Bailey, 90, passed away on Sunday, April 26 after a fulfilling and active life. She was the beloved wife of William and loving mother of Mary Allan (Bill), Irene Maury, Kathy Kaplan (Mike), Bill Bailey (Siobhan), and Teri Dowling (Pat); proud grandmother of Beth, Billy, Caty, Allison, Luke, Frank, Laura, Matthew, Rosie, Kyle, Tara, Charlie, Katie, Paddy, Nick, Gianna, Claire and great-grandmother to Mary and Nelle, all of whom she treasured. Born in Jersey City to Mary and Vito Vuocolo, Rosalie was the youngest of 8 and was predeceased by brothers Joseph, Salvatore, Charles, Conrad, Alfred and sisters Anita and Irene. She is survived by sister-in-laws Rosemarie Vuocolo and Marie Vuocolo and her many adored nieces and nephews. Rosalie moved to Paramus in 1959 where she was active in the community and Our Lady of the Visitation participating in the Rosary Society and church sponsored fund raisers and activities. A 1951 graduate of Holy Name Nursing School, she furthered her education and received her B.S. degree from New Jersey City University. Rosalie became the first R.N. at the newly-opened Bergen County Special Services School - later known as Norman Bleshman School - the first of its kind for its medically- based nursing in a public school for children with multiple disabilities. She was a trailblazer and strong advocate for children. Rosalie remained active throughout her life with a large network of family and friends, summer vacations in Lavallette, world travel and family celebrations. She was never idle and stayed busy with needlepoint, crocheting and cooking. She had a gift for making people feel valued and will be missed by the many lives she touched. Rosalie and Bill spent their last day together on their 68th wedding anniversary. They were known for their devotion to each other, their love of dancing to Swing music, pride in their close-knit family and strong values of faith, education, family and community. A celebration of Rosalie’s life will be announced at a future date. Donations in memory of Rosalie may be made to: Special Olympics or to Paramus Friendly Neighbors, c/o Human Services, 1 Jockish Square, Paramus, NJ 07652.

The family of Rosalie M Bailey created this Life Tributes page to make it easy to share your memories.

Send flowers to the Bailey family.