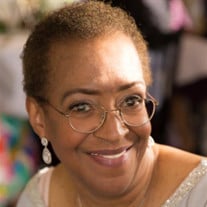 Roslyn Gibson, affectionately known as Roz, was born on January 22, 1947 in Cleveland, Ohio. She was one of two children born to the late Kenneth Wade and the late Christiana Wade. She attended John Adams High school and went on to Wells College where she received a Bachelors of Arts degree in 1969. After graduation she struck out on her own and moved to Paris, France, where she began her career at UNESCO. After a brief time there, she returned to the United States where she began working at UNICEF in New York, NY. It was at UNICEF that she met her late husband, Immanuel Gibson, also known as Jeff. They were married in 1973 and to their union were born Candice Gibson, Nikaya Gibson, and Karla (Gibson) Beranek. In 2003 Roslyn retired from UNICEF after 30 years with the organization. In her free time she loved to travel with one frequent destination being New Orleans, where she would visit with her daughter, Nikaya. She loved the music, the food and the atmosphere of the city and had hoped to relocate there to enjoy the warm weather and all the city had to offer. She also went back to Europe in 2018 where she was able to meet up with old friends and explore new cities. She also loved to attend her daughter Candice's roller derby games. She was always excited to travel to root them on and show her support. Recently Roslyn became a grandmother and she fit naturally into the role. She lavished attention on her granddaughter, Genevieve, and delighted in watching her grow and develop. She was excited to impart her love and wisdom on the next generation. She was a loving wife, daughter, sister, mother, grandmother, cousin, and friend. Her family meant the world to her, and everything she did was with them in her mind and in her heart. Roslyn passed away the morning of August 14, 2021. She leaves to celebrate her memory, her beloved daughters, Candice Gibson, Nikaya Gibson, and Karla (Gibson) Beranek, her sister, Vivian Wilson, her granddaughter, Genevieve Beranek, and countless relatives and friends. She will be deeply missed and lovingly remembered by all who knew her. The family would also like to extend an invitation to friends and relatives for the repast on Sunday, August 29, 2021 at: The Crow's Nest 309 Vincent Avenue & Route 17 South Hackensack, N.J. 07601 (240 South Summit Avenue, Hackensack, New Jersey, 07601 works better for some GPS systems) (201) 342-5445 1:30pm-4:30pm

Roslyn Gibson, affectionately known as Roz, was born on January 22, 1947 in Cleveland, Ohio. She was one of two children born to the late Kenneth Wade and the late Christiana Wade. She attended John Adams High school and went on to Wells College... View Obituary & Service Information

The family of Roslyn Gibson created this Life Tributes page to make it easy to share your memories.

Roslyn Gibson, affectionately known as Roz, was born on January...

Send flowers to the Gibson family.