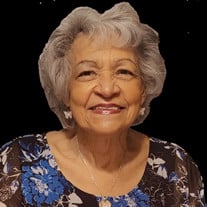 Sonia Marty of New Milford, New Jersey passed away peacefully on April 29th, 2022. The seventh child of 9 children, she was the daughter of Marcos Brea and Carmen Hernandez. She was born and raised in Sabana Grande de Boya in Monte Plata, Dominican Republic. As an adolescent, her family moved to Santo Domingo. Soon after, she began her relationship with Danilo Marty and married in February,1959. Their marriage of 63 years had ups and downs but love was always present. They immigrated to the Bronx, NY where they raised their children: Sonia Mercedes, (Yira), Margarita and Danilito. In 1976, Sonia and Danilo moved to Teaneck, NJ where Sonia began to work at a technology company, Beckman Instruments, in 1976. Here she put together circuit boards and cutting edge technology of its time to be used in clinical labs. Throughout her career she rose from entry level technician to operations supervisor. She retired in 2002. In addition to working at Beckman, Sonia became a Certified Nursing Assistant and worked at Wellington Nursing Home. Aside from the love of her family and work, Sonia’s faith was of the utmost importance to her. Sonia learned about Jesus Christ and the gospel through her sister Elena’s mother in law - Doña Gloria. She attended Iglesia Evangelica Bautista del Bronx, led at the time by Pastor Julio Cesar Ramos. As a new believer, he would visit her family to share a small portion of the bible and through him, God planted seeds that her next church would sow. When she moved to New Jersey, the Avila family led her to Iglesia Bautista Resurreccion. Through the ministry of Pastor Jorge Comensanas, Sonia continued to attend, accepted Christ as her Savior and was baptized. Through this church Sonia became acquainted with many brothers and sisters in the faith with whom she is now reunited in Heaven. Through the ministry of her next pastor, Reverend Rafael Fraguela she grew spiritually and matured in her faith. After the death of her son, Pastor Samuel Ravelo ministered to her family representing the faithfulness of God. Through this hard time, Sonia clung to God and his Word. She always was leading others in encouragement. She will always be remembered as a Sunday School teacher, mentor, counselor, spiritual mother, grandmother and friend to everyone. Sonia especially loved cooking, baking, playing with her grandchildren, watching basketball, traveling, and being in nature. She loved to share her testimony and uplift everyone from a close family member to her nurses and doctors. Remaining to cherish Sonia’s memory are her husband Danilo Marty; her daughters Margarita Marty Monserrat, Sonia Mercedes McCombs; her grandchildren Jose Lora Jr, Danilo Lora, Vanessa Tario, Rolando A.Monserrat; great-grandchildren Alyssa Lora, Ky’mirah Lora, Giovanny Lora & Camila Lora; her sister Elena Feliz and brother Rafael Brea; the many nieces and nephews.

Sonia Marty of New Milford, New Jersey passed away peacefully on April 29th, 2022. The seventh child of 9 children, she was the daughter of Marcos Brea and Carmen Hernandez. She was born and raised in Sabana Grande de Boya in Monte Plata, Dominican... View Obituary & Service Information

The family of Sonia Marty created this Life Tributes page to make it easy to share your memories.

Send flowers to the Marty family.