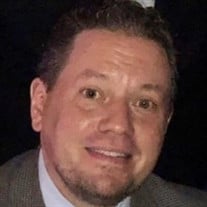 NIZZA, THOMAS JOHN “Uncle Tom”, 48, of Hackensack passed away on Sunday, October 31, 2021. Tom is survived by his parents Joseph Anthony Nizza and Maryellen Nizza (nee- Mooney). His brothers Michael Joseph Nizza and Joseph Anthony Nizza Jr. His sisters-in laws Daniela Nizza (nee- DiDonato) and Amber Nizza (nee- Cardone). His adoring nieces and nephews Mikayla, Kendra, Dylan, Max, Gabriella, and Trey. Thomas graduated Bergen Catholic in 1991, Manhattan College in 1996, and earned a Master’s Degree in Exercise Physiology from Northeastern. Tom was a proud partner of MTM Resources that he ran alongside his father. He was also survived by aunts, uncles, cousins, nieces, and nephews. Tom was affectionately referred to as “Uncle Tom”, “Uncle Tommy Boy”, or just “UTB” by his six nieces and nephews. He treasured them more than life. Tom grew up closely bonded to his family and friends. He was everyone’s “Uncle Tom”. He was generous and would lend a helping hand to all. He would have dinners with his nieces and nephews and banter with them while gently guiding them with his love. Aside from Tom’s family, he was particularly loved by every friend. Many of Tom ‘s friends and family will remember him for his generosity and his playful nature. Tom made life a better place for everyone in it. He loved giving and asking for nothing in return. His ability to lend a helping hand will remain unmatched. Heaven has gained a special angel. Friends and family will be received on Monday, November 8th from 4:00-8:00 PM at Volk Leber Funeral Home, 789 Teaneck Road, Teaneck. A Funeral Service will be on Tuesday, November 9th @ 11:00 a.m. at the funeral home. Cremation will be private.

The family of Thomas "Uncle Tom" John Nizza created this Life Tributes page to make it easy to share your memories.

Send flowers to the Nizza family.