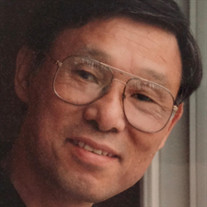 “Life means everything to me” are the words written by a young Korean Army Captain describing how he found the strength to perform an emergency amputation on an American soldier’s leg while serving in a M.A.S.H. hospital during the Vietnam War. For this act of bravery, he was later awarded the United States Bronze Star for Valor, as well as a Gold Star from the Republic of Korea, and a Silver Star award from Vietnam. Dr. Unsup Kim, former Director of Surgery at Elmhurst Hospital in Queens, New York, and Professor of Surgery at Mt. Sinai’s Icahn School of Medicine in New York, passed peacefully in his home in Teaneck, New Jersey on September 2, 2019. He is survived by his beloved wife of 56 years Myungsoon Kim of Teaneck, NJ, devoted daughters Kathlyn Kim and Sandy Kim (and her husband Dave Limone), wonderful grandchildren Sydney Shilan, Jake Shilan, and David Limone Jr, and sisters Kyung Jah (Seoul, Korea) and Kwi Jah (Busan, Korea). Born in 1934, Dr. Kim was the middle son of 8 children born in a small country village in South Korea to poor farmers. Despite the hardships of the Korean Civil war, at the age of 16, he was able to work as an “errand boy” in a U.N. Swedish hospital because of his command of the English language. It was this fortuitous event which we call “IN YEUN” in Korean that changed the course of his life. While working at this hospital Dr. Kim met and befriended Dr. Tor Van Schreeb who planted the seed in him that he should pursue a career in medicine. They remained lifelong friends. Defying all odds, given his family’s lack of education and financial means, Dr. Kim had the gumption to take the rigorous exam for Seoul National Medical school, and passed with flying colors. After graduating in 1959 and starting his surgical residency at the Korean Army hospital, he had the great fortune to meet Myungsoon Kang, the love of his life. They met after Miss Kang hired Dr. Kim to teach her to speak French so that she could understand the French films which were all the rage at the time. Unsup was a very strict teacher and if she mispronounced a word he would instruct her to “repeat” it over and over until she said it perfectly. As payment for her lessons, Miss Kang invited Unsup to attend a concert with a famous American pianist, Rudolf Serkin. They soon fell in love and were married in 1963. In 1966 he became Chief of Surgery in Korea at the Military hospital. From 1967 Dr. Kim was invited to continue his Surgical training in the United States at Mt. Sinai Hospital, followed with a guarantee of U.S. citizenship after 5 years. Recognized for his surgical and leadership abilities, Dr. Kim was promoted numerous times, and in 1975, was appointed as Director of Surgery at Elmhurst hospital, a role which he held until 2011. Even after he retired as Director, he continued to operate and provide exceptional patient care until 2016. As dedicated as Dr. Kim was to patient care, he was equally passionate about being an educator, and felt honored to serve as a professor of Surgery at Mt. Sinai’s Ichan School of Medicine- a position he held starting in 1983. During his tenure at Mt. Sinai, he had the privilege of training and mentoring thousands of medical students, surgical residents, and Fellows, many who have gone on to have illustrious careers serving as Directors of their own Surgical departments, fellow Professors, and accomplished authors. A stern, but generous educator, he was highly respected and loved by so many of his students who nominated him for numerous awards over the years, including the “Robert Paradny Outstanding teacher of the year”. His legacy for compassion, serving others, and putting “life above all” will continue through his family in whom he instilled these values, and the many medical professionals who he trained and mentored. Family and friends will be received on Saturday, September 7th at the Volk Leber Funeral Home, 789 Teaneck Road in Teaneck, New Jersey from 10:00 AM- 2:00 PM with a service immediately following. In lieu of flowers, friends and family may make a gift in Dr. Unsup Kim's memory to support medical student scholarships through the Enhanced Scholarship Initiative. Gifts can be made online by sharing the following link: http://giving.mountsinai.org/UnsupKim Donations can also be mailed to: Icahn School of Medicine at Mount Sinai, One Gustave L. Levy Place, Box 1049, New York, NY 10029 In the check memo line, please include: "Gifts to be made in honor of Dr. Unsup Kim to support scholarships"

&#8220;Life means everything to me&#8221; are the words written by a young Korean Army Captain describing how he found the strength to perform an emergency amputation on an American soldier&#8217;s leg while serving in a M.A.S.H. hospital during... View Obituary & Service Information

The family of Dr. Unsup Kim created this Life Tributes page to make it easy to share your memories.

“Life means everything to me” are the words written by a young...

Send flowers to the Kim family.