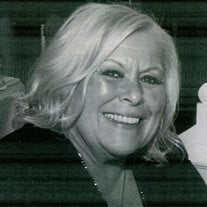 Virginia Marie Ann Siwulec aka GINGER and GINNY The blue-eyed blonde was born in the Bronx, New York on March 15, 1945 and nicknamed "Dream Girl" by her parents, GINNY and STAN SIWULEC. Her siblings, JAYNE, TOM, and NANCY called her "The Princess". The family moved to Teaneck, New Jersey in 1950 where she lived for the next 70+ years. She attended Longfellow, Benjamin Franklin, Thomas Jefferson, and Teaneck High [Class of 1963] schools. Thanks to the generosity of her parents, she also co-owned a condo in Bradley Beach, New Jersey. She morphed from being a tomboy who played with toy guns, bugs, snakes, worms, and chasing muskrats to being a "girly girl". She biked, cheered, skated, swam, and twirled a baton. As one of 30 cousins and 125 kids on her street, she didn't lack companionship. She and her friends, under the auspices of the Teaneck Elks Lodge 2080 and Teaneck Township officials, operated a weekly dance club with live bands and records named Tean Clan. She especially liked polkas, Lindys, and cha chas. She and some of those same friends were also sorority sisters in Iota Epsilon. GINGER also volunteered at functions with residents of St. Joseph's Children's Home in Rockaway, New Jersey. As a child, she spent Summers in the Bronx with her cousins and often joked that she was probably the only suburban kid to be sent to the city for vacations. How she treasured those times at Orchard and Jones Beaches! Her young adult jobs included babysitting, front-end store clerk at Martinizing Cleaners, and as a clerk at Citizens National Bank. Later, she worked at Paramount Pictures with her sister and brother-in-law, JAYNE and ART BARRON, and her cousin, ROBERT MOTT. She made life-long friends with many people at Paramount. Long after they left their jobs, they continued to share memories of every day life, and meeting and sometimes mingling with celebrities. She decorated one of her work spaces at Paramount with plants. The display impressed someone enough that it was used as a backdrop in one of their films. She inherited her love of gadgets from her Grandmother and Father and shared that passion with her cousin, JOE RINKE. At first glance, she may have appeared to have been disorganized, but she was detail-oriented. She crocheted, knitted, sewed, and made ceramics as gifts for family and friends. She was lucky to have travelled quite a bit of the world. Although she had already been to Africa and Asia, she wanted to return to see the silver-back gorillas and cruise on the Yangtze River. Her illnesses, though, stole those dream trips from her. She even fantasized about travelling in space. How many over-stuffed suitcases can you fit in a rocket? People were automatically attracted to her. When asked who she was talking to now, she'd answer that he/she just started a conversation with her. That happened all around the world! Using her earlier babysitting skills, she emotionally and financially supported her sister JAYNE's vocation of fostering and adopting 25 children and her brother TOM's family. She often backed up her younger sister's tendency of raising a menagerie, even successfully repairing a hamster's broken leg with toothpicks and surgical tape. She was DEB BARRON's Godmother and a favorite aunt to the rest of her nieces and nephews. Sometimes exasperating to others, GINGER lived her life her way. Her personality was volcanic; it took ages for her to blow up, and it was best to stay clear when she did. Most of the time, though, she would just smile, wink, or laugh. Her activities included TV, word search games, reading comedic mystery books, photography, and collecting recipes which she rarely cooked. Her number one passion was shopping, especially for handbags, coats, sparkly clean rings, and watches. In a meet-and-greet, she once offered a suggestion for a bracelet watch which was accepted and executed by JOAN RIVERS' design team. She liked bold bright colors and big floral arrangements. Hyacinths were her favorite flowers. In a visit earlier in the week, the hospice chaplain prayed her favorite prayer, the 23rd Psalm. Her last words were "Oh GOD." GINGER passed on July 4th, 2020 after a very long battle with multiple illnesses. She would rather her family and friends remember their shared experiences rather than her end-of-life struggles. Enjoy a Margarita, Bloody Mary, Chinese or Italian food, or a good Prime Rib dinner just as if she were with you. She asked that you be told that she loved you. At her request, she will be privately inurned in the All Saints' Chapel of The Church of St. Elizabeth Ann Seton, 30 Schoolhouse Road, Whiting, New Jersey 08759 near her sister JAYNE, niece TINA, and her close friends, "Pretty" ANN MARIE CONWILL and "Just" JEAN HOIN. In lieu of flowers, please donate to a charity or cause of your own. Or continue sponsorship of her animals [#22711] at the American Humane Society's Popcorn Park, Post Office Box 43, Forked River, New Jersey 08731-0043. The Teaneck Volunteer Ambulance Corps, Post Office Box 32, Teaneck, New Jersey 07666, has done so much for her over the years that you could pay it forward in her name. The Bradley Beach Food Pantry, 605 4th Avenue, Bradley Beach, New Jersey 07720 would appreciate your help. If you come across a random quarter, it'll be from GINGER; dimes and pennies are already being used by others. 444 was her lucky number. If you see it, she's visiting.

Virginia Marie Ann Siwulec aka GINGER and GINNY The blue-eyed blonde was born in the Bronx, New York on March 15, 1945 and nicknamed "Dream Girl" by her parents, GINNY and STAN SIWULEC. Her siblings, JAYNE, TOM, and NANCY called her "The Princess".... View Obituary & Service Information

The family of Virginia Marie Ann Siwulec aka GINGER and GINNY created this Life Tributes page to make it easy to share your memories.

Virginia Marie Ann Siwulec aka GINGER and GINNY
The blue-eyed...

Send flowers to the Siwulec family.