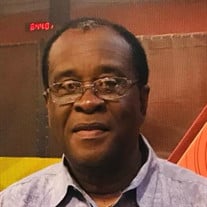 On April 19, 1948 Wilsor Emmanuel was the first born of the late Josephine Chery Emmanuel and Jacques Emmanuel in Port-au-Prince Haiti. As the oldest of ten, WIlsor learned at an early age what it meant to look out for others, particularly his beloved younger siblings that followed suit in birth order. His first love growing up was soccer and he often played from sun up to sun down. Wilsor took so much pride in his appearance, always looking sharp and smelling good. He would make it a point to never leave the house without looking his best even if he were just going to the store, shoes shined and all. Upon the completion of his secondary studies at the prestigious Lycee Toussaint L’Ouverture he migrated to the United States in 1971 where he settled in Brooklyn, NY. As he began to establish himself Wilsor started to work at a factory in New York, where he met his loving wife of 47 years, Tessa Veronica Hamlin. They were married in 1973 and had two children and later blessed to have two grandchildren. Upon the completion of his training and credentialing Wilsor began to work as a laboratory technologist starting at Saint James Hospital in Newark, NJ. In search of a better life for his family, Wilsor moved to Teaneck New Jersey in 1990. He eventually came on staff at the Holy Name Hospital where he worked for nearly 30 years, retiring this past June 2021 after the death of his beloved wife Tessa. Wilsor always worked multiple jobs as his family was always his priority. He was also a devoted and passionate man of faith who regularly partook in missionary trips back to his homeland of Haiti. Out of his limited resources he personally supported the education and wellbeing of a number of orphaned children leaving a legacy of love and charity. Wilsor was a man of God, member of Community Baptist Church of Englewood for years. He loved Pastor Taylorand his church family where he found much joy and comfort. Wilsor leaves behind his beloved daughter Karen Heather and her husband Neil Errar along with his grandson Bryce Neil Errar. As well as his beloved son Wilsor Jacques Emmanuel Junior, and his granddaughter Khloe Ashley Emmanuel. Wilsor was a devoted Grandfather to Bryce and Khloe, always putting their needs before his own. His four sisters Michael & her husband Joseph Daphnis; Ginette & Yves Moise; Josette & Jacques Saintilus; Bidianne “Gaby” Emmanuel. His sisters in law Micheline Emmanuel, Pat Persaud, Faith Cipriani, Wanda Thomas, Rosemary Fernandez, Althiea Hamlin-Jones as well as his uncle Francois Chery and family along with countless nieces, nephews, cousins, godchildren and best friend Pettes Dorcelus and others.Our sincerest sympathies to the families affected - the Emmanuel, Hamlin, Errar, Daphnis, Dorcelus, Saintilus, and Chery.

On April 19, 1948 Wilsor Emmanuel was the first born of the late Josephine Chery Emmanuel and Jacques Emmanuel in Port-au-Prince Haiti. As the oldest of ten, WIlsor learned at an early age what it meant to look out for others, particularly... View Obituary & Service Information

The family of Wilsor Emmanuel created this Life Tributes page to make it easy to share your memories.

Send flowers to the Emmanuel family.