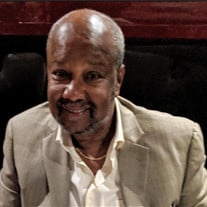 On the evening of April 5th, 2020, Winston “Lump” Pettway Jr, 76, a longtime resident of Teaneck, NJ passed away due to complications from the coronavirus. He was born on March 10th, 1944 in Mobile, AL to the late Mr. & Mrs. Winston and Earl Pettway, as one of six children. After graduating from high-school, Winston moved to New York City. It was there that he met the love of his life, LoisAnn Pettway. They were married in 1970 and would have celebrated 50 years together in October. As a young couple, they moved to Teaneck, New Jersey and had a child, HopeAnn. Winston started a business, LPH Packaging, that they both ran together for over 19 years. Winston loved the outdoors. He would spend time in the winters hunting in South Jersey and in the summers fishing in the Atlantic. He loved to cook. You could always find him preparing chicken cutlets, barbecuing ribs, or making famous family recipes like biscuits and cornbread. He loved people. Winston would often strike up a conversation with strangers, speaking as if they had known each other forever. He loved his family and friends, of which he had many, and kept in close contact with them - enjoying evenings out at dinner, long conversations, or texts on his phone. He brought joy, laughter, and humor to everyone in his life and there wasn’t anything he wouldn’t do to help out and be there for them. He will be deeply missed. Winston is survived by his wife, LoisAnn Pettway; daughters, Gaydon Williams, and Hope Pettway; sisters Hattie Inge and Phyllis Pettway; sister-inl-aws Elaine Losasso, Joanne DiLuzio; brother in-law Mark Diluzio, nieces and nephews Carl Pettway, Jessica Magill, Audra Cooper, Dustin Diluzio, Karen Inge, Joan Inge, Deborah Inge-Pinkham, Gail Fisher, Michele Farmer, and Roy Inge, Jr. A celebration of Winston’s life will be held at a future date.

The family of Winston Pettway created this Life Tributes page to make it easy to share your memories.

Send flowers to the Pettway family.